News
You are here: Home1 / News2 / Archives3 / ‘We are not merely a museum, but a vault of safe-keeping’ 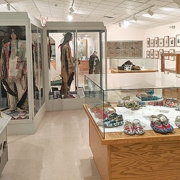 (Editors note: This is the second part of the column which ran in the September 2020 issue of the West River Catholic, highlighting The Buechel Memorial Lakota Museum, St. Francis Mission. For more information on the St. Francis Mission and our museum visit https://www.sfmission.org/)

The Buechel Memorial Lakota Museum is a small treasure-trove of artifacts from the Rosebud Reservation and St. Francis Mission. A recent Jesuit volunteer who once interned at the Smithsonian in Washington, DC remarked that we have items in our collection that even they do not have. What is absolutely unique about our collection is that our native artifacts have never left their place of origin: the things we have were entrusted to us by the people who made them and used them, and have never left. We are not merely a museum, but a vault of safe-keeping for items that would otherwise have perished, been sold, or otherwise have found their way miles apart from those who would appreciate them most.

Due to the small size of our facility, we are only able to display a small number of our available inventory, but even still visitors are surprised at what they are able to see. When entering the museum the first things you notice are the central display cases which contain example of Sicangu Lakota dress for men. One item of dress has strands of human hair on them, the meaning of which varies. Some say they are trophies of enemies defeated in battle, but more likely they are strands of hair of the people the man was responsible for protecting and nourishing by his hunting. In a sense, it could be that wearing such a shirt was a way of reminding a warrior and hunter of the people he had a duty to serve, and that their love and prayers went with him into battle, and into the wild. The garment also has examples of beautiful bead and quill work; the other garments on display show the same.

Our museum also displays a collection of pipes, moccasins, bows and arrows, and other artifacts (including a Martin guitar gifted to the mission by Johnny Cash after a concert here in 1983), along with a large number of photographs on display which represent only some of the tens of thousands of photographs available in our archives. Perhaps among the most fascinating are the Winter Counts. They are large pieces of hide, paper, or canvas on which are drawn pictographs that represent a historic event from a particular year. Each winter the men of the tribe would gather and discuss the events of the previous year, eventually settling on what they believed was the most important thing that happened. Whomever was the keeper of the winter count would then draw a small image as a memory aid so that the general history of the tribe could be recorded over a number of years. We have several winter counts on display in a gallery dedicated to these works of art.

We hope that one day you can visit our  museum and appreciate the beauty of these items that have their origin right here among your Sicangu brothers and sisters.