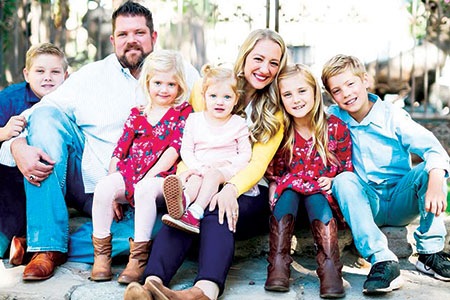 Matt Loboda and his family from Phoenix, Ariz. He will speak at the Summit. (Courtesy photo)

By Shawna Hanson
Director of Stewardship

“A story is a way to say something that can’t be said any other way.” — Flannery O’Connor

As a third-grader, my son was really struggling to memorize his multiplication facts. We tried everything from flash cards to math games to incentives, all to no avail. He just could not remember them for more than about a day, particularly those involving the numbers greater than five. Finally, I discovered a program developed by a mom who had assigned names to the numbers 6-9 and then developed simple one-sentence stories that contained the math fact. For instance, 7 x 8 = 56 became, “Mrs. Weeks (7) and Mrs. Snowman (8) drove down the highway at 56 mph. (complete with a simple illustration).” In just a matter of days, my son, who had struggled for months, had memorized all the math facts associated with these number “stories.”  There is power in a story. For one thing, we remember them.  Stories stick with us.

In addition, stories have a power that the mere recitation of facts do not. They draw us in and arouse emotions in us.  They bring to the forefront of our minds our own experiences, our own stories.

Recently, I attended a reception for parishioners at the cathedral given to share information with us about the parish’s renovation plans.  Much good information was shared and all present seemed to enjoy the conversation and fellowship. But several parishioners shared with me later that the best part of the evening was Fr. Brian’s spontaneous

recounting of attending Mass at the cathedral for the first time as an Air Force officer newly assigned at Ellsworth. All of us delighted in the warm welcome he received from a fellow parishioner and in a real way, shared his gratitude and joy.

Stories often generate conversation and help foster friendship. In late July, I attended the Regional Stewardship Conference in Sioux Falls. There were many fine speakers and good information shared over the course of two days. But, in all honesty, what I enjoyed most was dinner on Thursday evening. Will Wisner, the director of our capital campaign, generously invited those of us from Rapid City to dinner. He also delighted us all with many of his adventures traveling across our diocese gathering information for our campaign. Thanks to his (and others)

talent for storytelling and his generosity in sharing it, all who were at our table had a delightful time.

Lastly, some stories have the power, as Anthony de Mello notes in the quote above, to convey deep truths. We know this is true of the stories Jesus told. In his parables, deep truths are conveyed through these stories which often use experiences and events drawn from the everyday lives of those he spoke to. Despite the apparent simplicity of these stories, books have been written unpacking the meaning of some of them.

My great respect for the power of a story well-told is one of the reasons I am so excited about the upcoming Summit to be held on Saturday, September 22 from 10: a.m.–8 p.m. at Terra Sancta. The speakers we have coming for this year’s Summit are master storytellers. They have some powerful stories to share. Matt Loboda is a father of five and works in landscaping in Phoenix, Arizona. In many ways, he is just like the fathers and husbands you know. But Matt has a very powerful story to share with us. In December of 2016, while visiting her grandparents, 19-month old Joy Loboda, was found floating face down in the swimming pool. She was not breathing.  Matt pulled her from the pool and began performing CPR. “As I breathed into Joy, I prayed that my breath would be the breath of God into her …,” says Matt. Thus, begins Matt story of a long, very difficult and faith-filled journey for Matt, his wife Kristen and Joy. A story of a modern-day miracle which, like all good stories, touches the lives and hearts of those who hear it; a story which allows Matt to share with us the sure and certain knowledge of God’s great mercy and love.

Jim Beckman is also a husband and father. He has a great gift for sharing stories from his own life. He was privileged to witness the miraculous healing of his father, and as a Youth Minister for a Denver-area church to minister, to students who experienced the Columbine shooting. Jim was the keynote speaker at the Summit two years ago, and here are a few things people said about him then: “Jim Beckman was excellent!”  “Speaker was Exceptional!” “I would love to hear him again.”

Finally, Chris Stewart and Tony Brandt will be there as well, sharing once again their inspirational stories and experiences from their many years of teaching and ministering as they did so well at last year’s Summit.

Bishop Gruss will be joining us, leading us in Mass and sharing his wisdom with us as well. I am looking forward to the event. I pray that you, too, are inspired to make every effort to clear your calendar and come. There are many ways we can choose to spend our time; many demands put upon us. But this is worth sacrificing for!

Come. Be inspired. Be renewed.