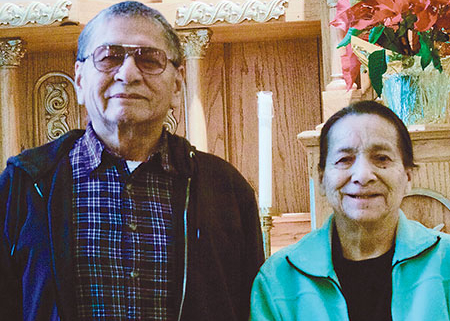 Deacon Ben Black Bear, Jr., will celebrate his 45th anniversary of ordination next month. He was ordained to the permanent diaconate by Bishop Harold J. Dimmerling in St. Charles Church at St. Francis Mission, June 19, 1976.

He has been married to his wife, Arlene D. Crow Eagle Black Bear for 53 years. They have five daughters and four sons.

“I live in Two Strike Community, north of St. Francis,” he said. My parents were the late Iva Lone Dog Black Bear and Ben Black Bear, Sr. Both were strong Catholics all their lives. Also, they were traditional Lakota. They barely spoke Englishand they had a rough life trying to find jobs. They made sure that their children were educated in a Catholic school. Putting their children in a Catholic Boarding School was like killing two birds with one stone — the children were educated and raised Catholic. Ben and Iva taught their children Lakota Language, culture and tradition by example,” he said.

Deacon Ben graduated from St. Francis Mission Catholic Boarding School. After graduation he earned a Bachelor of Science degree in Education from the University of S.D., Vermillion.

“I have worked in a wide variety of jobs over the years. Such is the life of a reservation Indian. Most of the time I worked as a teacher of my native language, Lakhóta. I was Director of Indian Studies at Sinte Gleska University (in Mission) shortly after it started. I became Secretary of the Rosebud Sioux Tribe, and was elected Vice-Chairman of the Tribe for two terms. I was elected Chair of the Board of Tribal Land Enterprise and Executive Director of the same organization for 13 years. I was on the board for 18 years,” said Deacon Ben.

As a high school student, he knew he wanted to do something that was helpful to the Lakota People. Lakota culture emphasizes the community over the individual. “I finally settled on spreading the Catholic faith to the Lakota. I didn’t know at the time, how I would do that, but I figured I’d find a way later,” he said.

He has had many grandfathers, uncles,  grandmothers, and aunts who were medicine women/men, or Catholic leaders. One uncle was a WWII veteran and an Episcopal minister. Another uncle worked as a Catholic Catechist.

“I grew up hearing stories, especially from my mother. One was about the Wounded Knee Massacre. Apparently one of my grandmothers, a relative of Chief High Hawk, was killed at Wounded Knee. She is buried there in the mass grave. Chief High Hawk was my mother’s grandfather.  He fought the 7th Cavalry after the Wounded Knee Massacre. He became a Catholic right before he died. That influenced my grandmother and mother to become strong Catholics all their lives.

Both the Sharpfish and Black Bear families were very active in the St. Joseph’s and St. Mary’s Societies over the years. They were elected officers of the societies or did other work in the activities of the societies.

The Lay Ministry program was started by the Jesuits at St. Francis. “I joined that initially. Later, when the diaconate program was begun, and I started that training.  Most of my teachers were Jesuits that I knew from the school,” he said.

Three of the men he trained in the diaconate program were ordained before Deacon Black Bear — two of those were also Lakota.

In the diaconate training program he learned many things about the Catholic Church — history, theology, Christology, sacraments, moral theology, and liturgy. “One of the funny things I learned was how to tie a cincture on the alb. Priests had a fancy way of tying the long cincture. So, when I got a shorter rope like a cincture I asked one of the Jesuits how to tie it. He tied it in a square knot. ‘Oh!’ I thought tying cinctures was in the rubrics,” he said.

He was assigned to the St. Charles Parish in St. Francis. He also worked at the other parishes occasionally — Rosebud, Parmelee,  and Mission. “I conducted wakes and funerals all over the Rosebud Reservation including Mellette, Tripp and Gregory Counties. I was also active in the St. Joseph’s and St. Mary’s Societies until the 1980s. I was a member in the St. Kateri Tekakwitha Circles,” said Deacon Ben.

He officiated at weddings and baptisms. “I still preach once a month at St. Charles Church,” he said.

“During the 1980s I was working with a young man on the Black Hills issue. Right after the Black Hills Court case was over with in 1980, we started a Black Hills Steering Committee to try to get back some of the Blacks Hills lands returned to the Lakota through Congressional Legislation.

d­iocese had five Lakota Reservations on it and most of them were Catholics,” said Deacon Ben.

A study determined that 40% of Catholics in the West River area were Lakota. Bishop Charles Chaput established the Office of Native Concerns so that the bishop would have a program to reach the Lakota in the diocese. It has since been renamed Native Ministry.

“This happened in 1990. That was the Year of Reconciliation for South Dakota and it was the 100th anniversary of the Wounded Knee Massacre. I was appointed the first Director of the Office of Native Concerns. I worked as liaison to the Lakota people for the bishop.

“After working for the bishop I went back to the reservation and became Director of the Buechel Memorial Lakota Museum at St. Francis Mission. I took care of the exhibits and the collection for one year,” he said.

After 25 years he resigned from working for the tribe. Then, he was hired at St. Francis Mission as the Lakota Studies expert.

“I work with everything that has to do with the Lakota Language. I translate prayers, preach in Lakota, teach in Lakota.

“When St. Francis Mission started Sápa Ún Academy, a Catholic school for elementary students, I started teaching the Lakhóta Language at that school. I really enjoyed teaching those little children. I think they enjoyed learning Lakhóta. At their end of the school program they put on some Lakota performances which surprised me quite a bit because they did it on their own. I didn’t tell them to do it or coach them. It was all on their own initiative.

Anyone who has served in ministry knows there is not a lot of feedback. “One time somebody called me up and said, ‘your preaching has turned me back to the Catholic faith.’  Just that short statement put me in seventh heaven. God is working through me. I am not changing the world, God is, through me,” he said.

One of his biggest challenges has been learning to read and write in his native language.  “Even though I spoke Lakhóta, I had to learn a lot in becoming literate in Lakhóta.  I had to learn how to translate and produce material in the language. All this involved learning on my own, and that was the most challenging,” he said.

“I’m almost finished translating St. John’s Gospel to Lakhóta. As soon as I finish, I will retype St. Luke’s Gospel for checking. Then I will start on St. Mark’s Gospel. I’m anxious to get to the Epistles and Acts of the Apostles.  I hope I stay above ground until I can get there,” he concluded.

The road to priesthood: ‘That’s when the church became a family’
Scroll to top
X