News
You are here: Home1 / News2 / Archives3 / Preserving artifacts that were made here, used here, and remain here 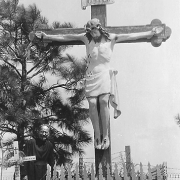 (Editor’s note: The first part of this series ran in the May 2020 West River Catholic, highlighting the Heritage Center at Holy Rosary Mission, Pine Ridge. Part II is a highlight of The Buechel Memorial Lakota Museum, St. Francis Mission on the Rosebud Indian Reservation.)

We are in a unique position to visit this phenomenal museum and appreciate the contrast between our archives and a museum.

In 1947 a Jesuit missionary priest named Fr. Eugene Buechel (beak-ull), celebrated his fiftieth anniversary in the Society of Jesus. That same year the Lakota Museum was built in St. Francis, offering a means of displaying the massive collection of Father Buechel’s. Today, seventy years later, the museum still stands. It has grown since his death in 1954 with continued donations of items entrusted to the safekeeping of the St. Francis Mission.

Father  Buechel was born in Germany in 1874, entering the Society of Jesus in 1897. From 1902 to 1904 he taught at the boarding school in St. Francis before going to St. Louis to finish his training for the priesthood, which occurred in 1906. He would move between Rosebud and Pine Ridge reservations before returning to the St. Francis in 1929, remaining there until his death.

He dedicated his life to two pursuits: evangelizing the Lakota people and seeking to share the treasures of our faith with the native people of this land, and doing all he could to learn and preserve their culture, primarily by means of photography, artifact collection, and linguistic study.

One of his greatest accomplishments was the compilation of the first Lakota-English dictionary, containing over 30,000 words, including rare and archaic words nearly lost or forgotten in recent years. As he continued to learn from the Lakota people, they saw his love for their culture and desire to preserve it for future generations, leading to the donation of many personal items; the museum’s collection of authentic beadwork, clothing, weapons and other items dating as far back as the mid-1800s, before the establishment of the Rosebud Reservation.

It is thought that the museum contains one of the largest collections of Native American artifacts outside of major institutions like the Smithsonian and various universities. The collection is possibly the only  such collection still present among the culture to which its items belong: the items were made here, used here, and remain here.

Next to the museum is a small wooden church named Holy Family. It was originally located on the prairie northeast of Parmelee, and was closed in the 1940s. In the 1970s it was moved to its current location, repaired, and repurposed as an addition to the museum. On display within are a number of artifacts showcasing the Catholic faith of the Lakota people on the Rosebud. This tiny church represents the thirty or more small churches that once dotted the reservation, which once included Tripp and Melette counties, in addition to Todd county.

In November Father Boddicker tells what the museum has to offer.