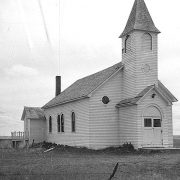 Bishop Robert Gruss will celebrate Mass at Our Lady of Victory Church, Plainview, on July 29, at 2 p.m. to commemorate the church’s centennial. Parish pastor, Fr. Janusz Korban of Faith, will concelebrate.

It was the first church built in rural Eastern Meade County and was dedicated by Bishop John Lawler on November 23, 1918.

On June 7, 2018, the Presbyteral Council for the Diocese of Rapid City recommended the church be canonically closed and the final regularly scheduled Mass was celebrated on June 24. An official decree regarding the closing of the parish is expected to run in the August issue of the West River Catholic.

According to a diocesan archive article written by the late Isabell King, of Sturgis, the land for the parish and rectory was donated by Tony Kovarik from his 1908 homestead. Construction started in 1917 and was completed in 1918. The first contribution of $500 came from Catholic Extension Society and was attributed to an anonymous donor. Pat Dewey, who did not own a wagon or buggy, went from farm to farm with a cultivator collecting money to build the new church.

Parishioners suffered a setback when their contractor ran off with part of the money collected for construction. They raised more money by holding card parties and other social events. Another carpenter was hired, and plastering, painting and a heating furnace were donated for the building. In her account, King said, “The ceiling was so high that heat rose to the top and stayed there, while the congregation was shivering and shaking.”

The first recorded pastor was Fr. Henry McRory who came from New York City. He lived with area families until the buildings were finished. In 1934, the rectory was sold, and the church became a mission parish served by St. Joseph Church, Faith. It has been served by Faith since then.

Join youth and young adults from around the country for a pilgrimage to Washington D.C. to participate in the Annual March for Life on Friday, January

Join youth and young adults from around the country for a pilgrimage to Washington D.C. to participate in the Annual March for Life on Friday, January 21, 2022.

This year we have a special opportunity to participate in the Students for Life National Pro-Life Summit  on Saturday.

The pilgrimage is open to all high school and college-age students.

Cost: $600 (includes bus trip, hotel, snacks, entrance to the rallies, and an unforgettable experience witnessing to the sanctity of life.)