“Starting Palm Sunday, the church is telling us that these are the eight days that changed your life. Your life was redeemed by Jesus Christ and transformed,” said Dr. Tim Gray*, guest speaker at the Palm Sunday Brunch sponsored by Catholic Social Services.

April 10 in Rapid City, Gray spoke to a crowd of 500 people gathered for the annual CSS fundraiser. “One of the most distinctive aspects of Christianity is its care for the poor. That is why you are all here today, to support Catholic Social Services,” said Gray.

He focused his presentation on Holy Week, sharing Old Testament stories that foreshadowed what Christ would do during his final days on earth.

On Palm Sunday, Gray said, “The crowds are greeting Jesus just as they did 150 years earlier when Judas Maccabees liberated Jerusalem from the Greeks (2 Mc 10:7). Now the Greeks aren’t ruling, but the Romans are. The theme of Palm Sunday is victory, they throw down their cloaks in front of him, and that ancient gesture is in 2 Kings chapter 9, when Jehu was made king. When Jehu was anointed by the prophets, every man took his cloak off in front of him to walk over. It was a sign that they were submitting to his authority.”

Gray added the people in the streets were singing hymns of thanksgiving, as we do on Palm Sunday during the procession, and everyone has palm branches.  One of those hymns was Psalm 118 “blessed is he who comes in the name of the Lord, Hosanna in the highest.”

“We sing the same song as the apostles, ‘Hosanna, blessed is he who comes in the name of the Lord,’ like Jesus came to Jerusalem he comes to the altar and into our temples—our bodies through the Eucharist,” Gray said. “We want to be a house of prayer.” 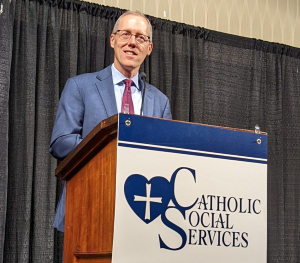 On Holy Monday Jesus goes to the temple and cleanses it, disrupting the money changers. “You have made my Father’s house, which is to be a house of prayer, into a den of thieves.”  Gray explained the focus of religion needs to be prayer and Jesus is quoting a famous prophet, Jeremiah, during Solomon’s reign (Jer 7:11).

“Holy Tuesday I think of as Teaching Tuesday, the scribes and the pharisees are upset about his entry into Jerusalem and his cleansing the temple. They say, ‘By what authority do you do these things?’” According to Gray, Jesus tells the parable of the Wicked Tenants killing the owner’s son by taking two stories from the scriptures of Israel and putting them together in one story. The first is from Isaiah 5 which is about the temple owner (God) who planted a vineyard on a very fertile hill, Mt. Zion.

When the wicked tenants want to kill the heir, Gray said it is the story of Jacob’s son Joseph. Joseph’s brothers want to kill him, but they end up selling him for silver. Later, in Holy Week Jesus is sold for silver.

“Jesus is portraying himself as the new Joseph. He will be betrayed by his own brethren, one of the twelve,” said Gray. “When we see the stories doubling, only God could have written history with such a plan and design.”

Gray explained the scribes and pharisees recognized they are the wicked tenants in the story, and they are out to get revenge on Jesus. They test Jesus three times like Satan did in the dessert. On the same day, in the treasury there is a copper coin collector shaped like a trumpet and donated coins made a lot of noise when thrown in. He sees a widow give one small coin which was her whole livelihood and Jesus said the others gave out of their abundance. “So, Jesus notes the temple is a place for prayer and sacrificial giving for love of others,” said Gray.

He called the middle of the week Spy Wednesday because Judas is spying for an opportunity to sell out Jesus. He goes to the chief priests and sells Jesus for silver; the Son of God is betrayed for love of money. “Judas’s sins are the most common of humanity, where we love money and mammon more than God,” said Gray.

At Holy Thursday, the last supper, Jesus washes the apostles’ feet, a job usually reserved for a servant. After the meal he gives a new commandment, “Love one another as I have loved you,” (Jn 13:13-15).

“The other unique feature (of Holy Thursday) is taking the Eucharist out of the church, in my home church there is a little garden area, and we have adoration. Jesus goes out (from the Upper Room) to the garden of Gethsemane,” said Gray.

On Good Friday there is no Mass, but there are Communion services and veneration of the cross, because the Son of God died for everyone’s sins. “Why is Good Friday the longest day of petitions? This is the day Jesus offers himself as a sacrifice to intercede for us. Pray for every possible need. Bring your petitions to the Father,” said Gray.

On Holy Saturday there is no liturgical Mass, Catholics wait until Vigil after sundown. “What happens in the tomb? Jesus rises in the darkness,” said Gray. “The light of Christ, the Easter candle comes to all of us. Easter Sunday, the light comes with the resurrection.”

Gray said, “Celebrate with great joy. Jesus has gone through death and come out the other side. It is a new creation, a new Exodus, a new deliverance from sin and bondage. Make this week a week of prayer and devotions more than other week of the year.

“The church calls this Holy Week; pick up your Bible and read the end of the Gospels. Make it a week where you want to be close to the Lord, because he did all this for you. Jesus loved us to the end.”

Jim Kinyon, executive director of Catholic Social Services wrapped up the brunch with an appeal for giving. “We have fought through COVID for a couple of years, and I think we found underneath there are a lot of mental health needs — a crisis that is so profound it is shocking. Literally, we have lost over half our counseling staff; so, trying to figure out what to prioritize gets increasingly difficult. We have served over 4700 people; it is a record because we can’t find staff,” he said. Kinyon added the same challenges are affecting Catholic Charities across the nation as they try to bring Christ’s presence to those in need.

*Tim Gray is President of the Augustine Institute and a well-known Catholic speaker and author. He worked as a theology teacher at St. Thomas More High School, Rapid City, from 1993-95. He received his MA from Franciscan University of Steubenville, Ohio, ThM from Duke University, Durham, N. C. and PhD in Biblical Studies from Catholic University, Washington, D.C.

Under his leadership, the Augustine Institute has created popular programs including Symbolon, a comprehensive program of faith formation for adults and FORMED, a digital platform with Catholic films, ebooks, and audio talks, and “Signs of Grace,” a sacramental preparation program for children. He is the author of several books including, “Peter: Keys to Following Jesus and Praying Scripture for a Change: An Introductions to Lectio Divina” from Augustine Institute. 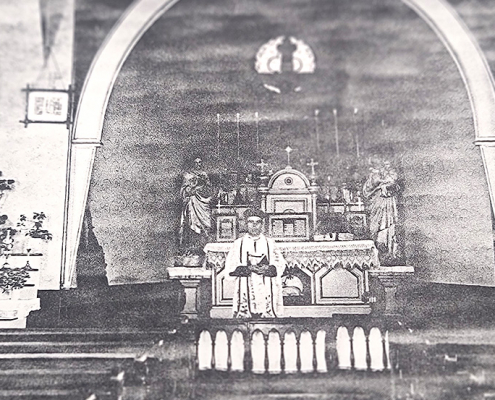 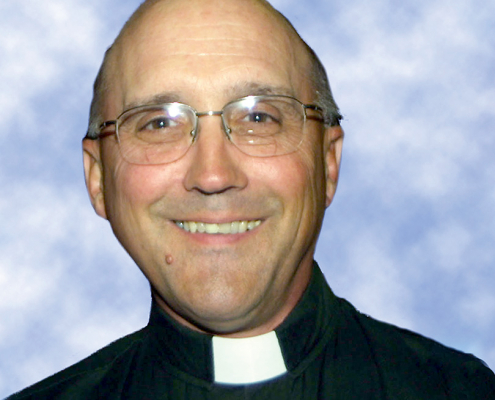 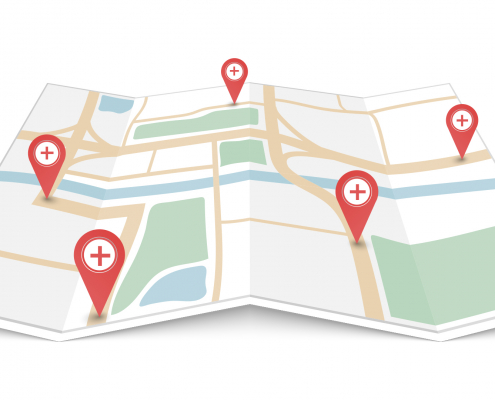 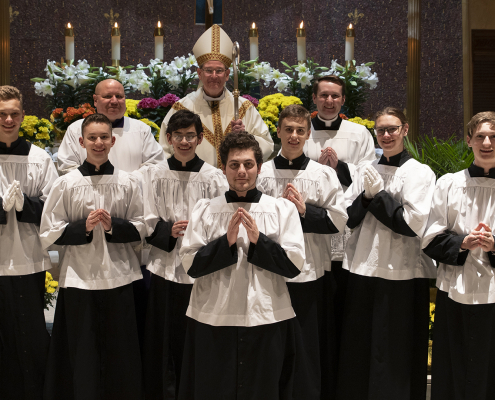 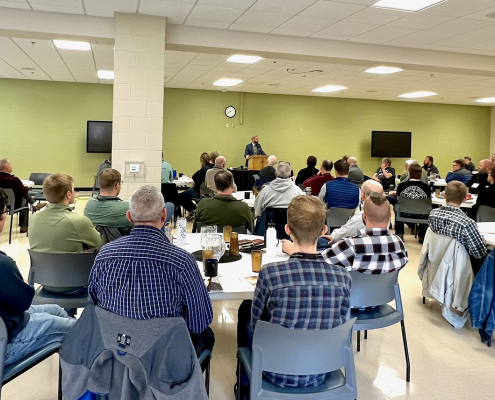 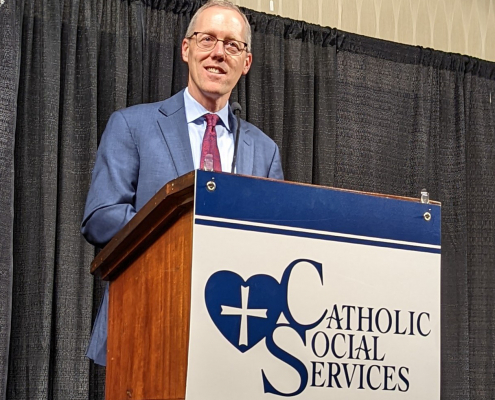 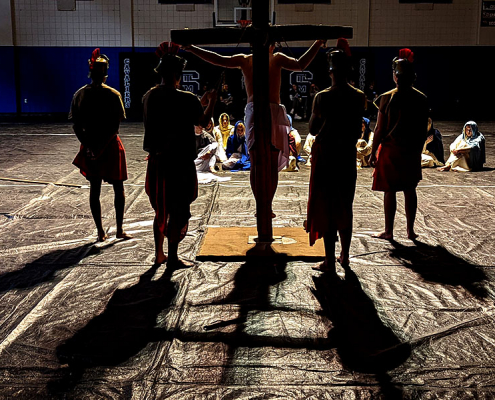 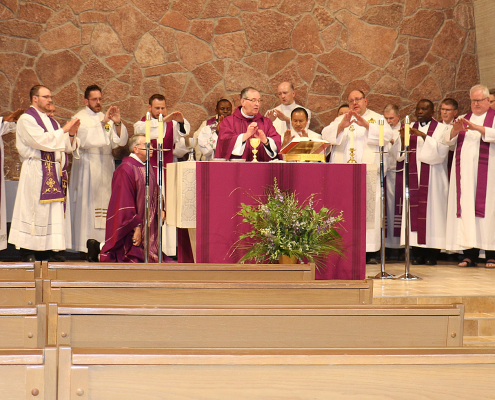 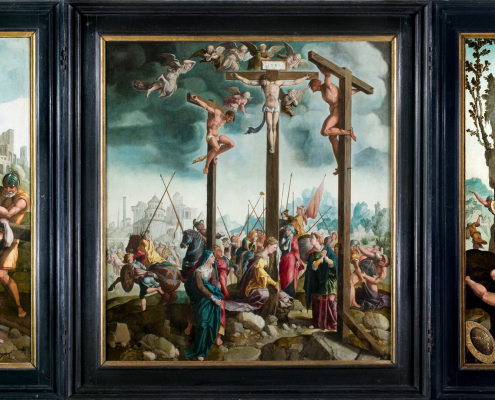