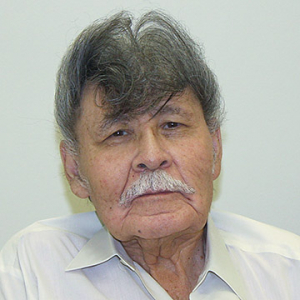 James Willard Garnette was born on March 3, 1936, to Henry K. Garnette and Grace (Giago) Garnette. James was known by his nickname, “Heavy” by all who knew him. He died on February 2, 2022, at Monument Health with his family at his side. He was 85 years old.

Heavy was born at the Garnette family home on Red Water north of Kyle, where he was one of nine children. Heavy and his brothers and sisters all attended Red Cloud Indian School at Holy Rosary Mission.

Heavy attended Holy Rosary until 11th grade when he left school to join the United States Navy during the Korean War. He enlisted on June 3, 1953, and reported to San Diego Naval Base. He served in the Navy for four years and was honorably discharged on February 13, 1957. Heavy then returned home to his family at Kyle and enrolled at Holy Rosary where he studied and earned his high school diploma.

In 1962, Heavy married Hannah Clifford. Shortly afterwards, they were in an automobile wreck in which Hannah died and Heavy was critically injured. He spent several years in and out of hospitals but remained disabled. Heavy moved to Rapid City so he could be closer to specialized medical care.

He was employed at Sioux Pottery where he worked as a pottery designer, and he was able to sit down while he worked. He was an artist in his own right so designing pottery was something he did with ease. His supervisor nominated him for the 1978 South Dakota Outstanding Handicapped Citizen, which he won.

September 13, 1986, he was ordained a permanent deacon by Bishop Harold Dimmerling at the Mother Butler Center adjacent to St. Isaac Jogues Church, Rapid City. Heavy continued his work with St. Isaac Jogues Church as a deacon until he was no longer able to walk because his stronger leg broke beyond repair. He was then confined to a wheelchair. In 2018, Heavy moved to the South Dakota Veterans Home in Hot Springs where he lived until his death.

Heavy is survived by his brother Joey Garnette (Shirley), his sister Elizabeth Garnette Anderson and his sisters-in-law, Rickie Garnette and Ruby Garnette. He is also survived by several nieces, nephews and cousins.