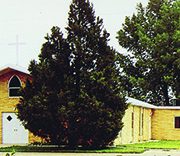 The Catholic church in McIntosh began as a mission of the Lemmon parish in 1908. Parish records show the first Masses were said December 22, 1908, and December 15, 1909.  Masses  were held in the courthouse or other available buildings. Baptisms were done in family homes.

In 1911, the parish was served by the Benedictine priests and attended by Ft. Yates, N.D, with a mission at McLaughlin and other Indian missions of the Dakotas. The first diocesan priest was assigned to the area in 1916.

The Benedictines purchased land for a church and a home at the end of the block was bought for a rectory. The lots between the home and parish were gifted to the church by a parishioner. Around this time, land for the cemetery was donated.

Construction began on the orignal St. Bonaventure Church  in the spring of 1918 and was completed that summer. The final debt of $1,556.87, was paid in 1924. The first resident pastor was also assigned to the church that year.

From 1930-1943 many improvements were made to the church and a home was purchased and moved across the street for the rectory.

In 1962, Frank Lang, a long-time parishioner, was the first to put a shovel into the ground for the new church. Lang, a trustee in 1918, participated in ground-breaking of the original parish 45 years prior and was one of six surviving charter members of the parish.

The first services were held in the new building, March 3, 1963. The church, described as the, “the most beautiful Catholic church in western South Dakota,” in the Lemmon Leader was “dedicated with impressive ceremonies Sunday (July 14). Hundreds of parishioners and friends attended.”

In the years following Vatican II, a renovation project was completed which included the addition of a smaller chapel for daily Mass. A Catechetical Center was built in 1970. The building housed the living quarters for the parish priests and classrooms for religious education and church activities. The old rectory was sold and moved to another part of town.

According to a West River Catholic article, remodeling the interior of the parish was discussed as early as 1988 and again in 1994. In 2000, a parish-wide appeal was launched to help pay for the renovations and after a grant from the Extension Society work began on the church. The building was made handicap accessible, a gathering area was added, and the sanctuary was opened up allowing for all the stained glass windows to be viewed. The church rededicated on November 4, 2001.