The road to priesthood: ‘That’s when the church became a family’

You are here: Home / News / Event Registration / The road to priesthood: ‘That’s when the church became a family’

On June 29, Josh Lee will be ordained a transitional deacon at the Cathedral of Our Lady of Perpetual Help, Rapid City, at 11 a.m. The event will be livestreamed at www.rapidcitydiocese.org and the Facebook page, facebook.com/DioceseofRapidCity. He recently spoke to the West River Catholic about his experiences.

WRC: When was the first time you thought about the priesthood?

Josh: I never thought about the priesthood until age 25. It wasn’t something that I really understood or even considered. It was about the time I got to Faith and thought this was really appealing and this is something that God might want me to look into. I taught confirmation at St. Joseph’s in Faith. Getting to know the people and getting to teach their children was so affirming.

WRC: What did you do before you entered the seminary? 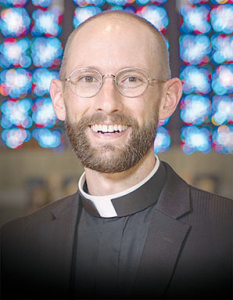 Josh: I wanted to be closer to western South Dakota. A job popped up and I talked with a man I had known from college who said he had a guy in Faith who sells a product for him, and he is about to lose one of his employees. I went there for a job — not knowing what I was getting into but knowing I was moving closer to home.   I worked for a company selling and delivering seed and feed to area ranchers in Faith. As soon as I got there, I knew I was home. I knew that was where I belonged.

When I lived outside the diocese I had hoped to be involved in a local parish. No one really acknowledged me; I had been there for year, so I made a strong intention to make myself meet people. As I was walking out of Mass (in Faith) people were calling me by name even though I didn’t know who they were. They found out I was coming, and they made me feel so welcome. I have never forgotten that, and I never will. That’s when the church became a family.

WRC: What has been your seminary experience?

Josh: I’ve really been blessed to be at Kenrick/Glennon in St. Louis. I finished my fifth year in early May. It’s been an outstanding privilege to walk along with these other men who want to know love and serve God. They have the same desire to holiness that I have — that brings us together — closer than blood. We are all brothers walking along a journey. This has played a huge role growing closer to God myself. It’s been nothing short of beautiful.

WRC: How would you describe your prayer life?

Josh: I’ve got a routine. Each morning I wake up with an offering and the pray the Year of St. Joseph prayer. Then I sit down and begin with the Liturgy of the Hours and the readings with a cup of coffee. It gets me started spiritual and physically. Then I pray morning prayer with the other seminarians and attend Mass. Throughout the day, praying the liturgy of the hours and trusting those little moments to Jesus and Mary — trying to give everything to them from classes to hang nails. I do a mid-afternoon and evening rosary. Keeping not only my intentions but those intentions of the diocese as well. At the end of the day, I look back to see where God has been because it’s really easy to miss him. Just before I go to sleep — walking to my bed — I am asking Him to deliver me from evil.

His will, His way, My Faith
Scroll to top
X