News
You are here: Home / News / WRC Archives / I could see that God was forming me 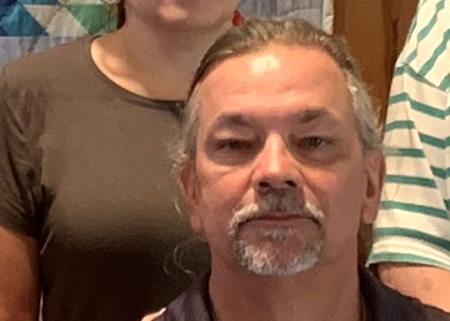 Editor Laurie Hallstrom of the West River Catholic interviewed deacon candidates for podcasts (see schedule at right). The men are  preparing to be ordained a permanent deacon on Oct. 8. Here is a partial transcript of her talking with Bill White, a parishioner and Pastoral Assistant at Christ the King Church in Porcupine on the Pine Ridge Reservation.

WRC: Can you tell me about your wife and family?

Bill: I’m married to my lovely wife Terri,  we have five kids and a lot of grandkids.

WRC: Didn’t you have a military career?

Bill: I was a member of the South Dakota National Guard for over 38 years, almost 39. I worked full time as a maintenance supervisor for over 31 years.

WRC: Can you tell me what you do at your church?

Bill: I’m the pastor assistant, so I’m the one in the office. I do home visits and I do some maintenance — mow some of the cemeteries a few times a year. I do whatever needs to be done. And, I prepare for the liturgy.

WRC: Let’s start at the beginning of your life. Where did you grow up?

Bill: I grew up in Rapid City. I was a cradle Catholic. I went to St Isaac Jogues when it was down by Rapid Creek before the (June 9, 1972) flood. Growing up I was an altar boy very early in life, age 7, and I thought I was a professional mourner. They would always check me out of school for funerals.

WRC: Was there a moment that you clearly felt the Lord acting or speaking with you?

Bill: You know, I had a chance to reflect on that during our canonical retreat and I kind of did a lifelong examen. I didn’t concentrate on where the Lord wasn’t present, but more on where he was present in some of the people who touched me throughout my life. … He was forming me my whole life. A guy doesn’t realize that early on. I would say I would never see me doing this, even 10 years ago, but when I went back and started writing down the names and some of the things that happened in my life, I could see that God was with me and he was forming me.

WRC: So, when did you start thinking about the diaconate?

Bill: It was in March of 2013. I was at work and I was on my computer and for some reason I checked into the diocese website and it went to a Canku Wakan retreat. I’d never been to one so I started getting interested and for some reason it went straight to a page about Deacon “Heavy” Garnet. It gave me a story about him, and his near fatal accident that changed his life. I could really see myself in that story. That’s when it hit me, so I went home and told Teri “I think I’m supposed to become a deacon.”

WRC: Is there anything you’re looking forward to once you are ordained a deacon? What would you like to do?

Bill: I just want to do what God has intended for me. I am sure I’m in the right spot and this is where he wants me. I continue to pray and grow, and my formation just begins after I am ordained. I’ll look for direction.