News
You are here: Home1 / News2 / Archives3 / Generations have risen to call his name Blessed — The Fruits of Fr. Co... 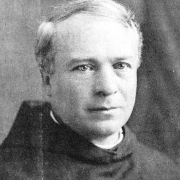 Interview with the Very Reverend Fr. Columban Bregenzer, OSB, VG, on August 12, 1941, titled Easter Sick Call.  Some license was taken to correct grammar, terminology and it includes two interviews.  In his own words, “the following story illustrates the difficulties under which the early missionaries were forced to labor.”

After conducting the strenuous Easter Holy Week services at St. Martin Convent I was called in the later afternoon of Holy Saturday, to accompany the doctor to a distant ranch on a sick call.  We traveled in the usual conveyance of that time, a spring wagon with a horse.

It was close to midnight by the time I had completed the religious rites and I desired to return immediately. I knew that penitents would be waiting for me Easter morning, but the fatigue of the horse and condition of the roads, for it had begun to rain, made my return impossible until morning.

The sick calls in those days were awful working conditions. When the people came to get the doctor, I, Father Columban (as I wish to be called), went out with him. When it snowed, once, I got so lost so I let the reins loose and the horse went home. Sometimes, a team was hired at the livery stable for me.

In 1902, with Bishop Stariha as first prelate, there were five priests, including myself to take care of the 41,000 square miles. The country was full of cattle men who came in once or twice a year to get supplies and then went to holy Mass and communion — those days the church was packed!

The best that the family could offer me for my lodging was the garret and a sack of straw. The scurrying of the mice over my body was not conducive to sleep. As early as possible I was on the road and reached Sturgis about eight o’clock in the morning.

The sisters had been waiting for two hours for holy Communion; the soldiers from nearby Fort Meade crowded the church waiting for a chance to make their Easter duty. After giving holy Communion to the sisters and hearing the confessions of the soldiers it was time for the ten o’clock high Mass. After Solemn Vespers in the afternoon I could finally seek much needed repose.

I was not the first Benedictine in the Hills. Father Joachim came here in 1892. My Abbot told me that he wouldn’t leave me here longer than holy week. He also did not tell me about the size of the field, or about traveling to Lemmon and Faith. I came out to a little church. Yet, I said “you ought to have a holy man for this work.” Little did I know, that weeklong assignment would turn into 39 years!

Fr. Columban was hailed for his charity, his sense of justice, and his great desire for unity. His efforts as a priest of God and the spiritual guidance he gave his parishioners was an inspiration to the entire community and the surrounding settlements.

On September 10, 1988, Father was entered into the South Dakota Hall of Fame. This award was posthumously accepted by Sr. Marmion Howe.

The history of our own diocese remains fruitful and continues to bear fruit as the Gospel of St. John commands, “your fruit shall remain” (Jn 15:16-19).