News
You are here: Home / News / Uncategorized / FOCUS at SDSM&T: ‘Connecting the head and heart’ 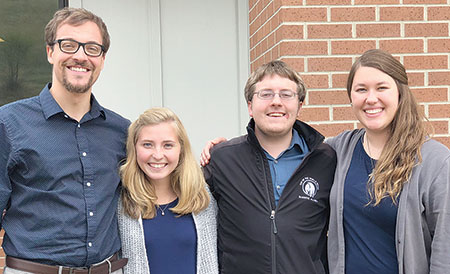 According to a combined study, from St. Mary’s Press with the Center for Applied Research in the Apostolate, approximately 13 percent of young adults between ages 18 and 25 are former Catholics. It also states that they desire a spiritual connection even though they do not consider themselves affiliated with the church. One way of encouraging a connection is to reach out to students on college campuses.

FOCUS is a Catholic outreach organization whose mission is to share the Gospel with college and university students. Missionaries are trained in church teaching, prayer, Scripture, evangelization and discipleship — inviting students to have a personal relationship with Jesus and accompanying them along the way. On the SDSM&T campus, it’s also about taking the analytical thought process of many of the students and connecting it to a relationship.

“It’s connecting the head and the heart,” explained Megan Henle, FOCUS team director in her fourth year of campus work. “Yes, it’s the analytical part, but then teaching them to live out the fruits of the Holy Spirit. Everything about us should be living out the intellectual and allowing the Holy Spirit to do what it wants with us.”

“I had to go through the process of connecting of my mind and my heart in my relationship with God and I knew that would be a big thing here,” agreed Joey Fritz, a third-year missionary.

Fritz majored in computer science at North Dakota State University, Fargo, N.D., and encountered FOCUS at a SEEK2015. He explained that faith was something he did out of habit until he heard a talk from Father Mike Schmitz at the yearly national conference presented by FOCUS.

“He said we were made not just for a relationship with God but added we are made for a deep intimacy with him,” he said. “My analytical side told me if the Eucharist is really Jesus then that’s the greatest source of grace on earth (going to receive him) so there should be nothing in my day that should stop me from that.”

“The girls I have been working with have so many questions. I have been focusing on trying to introduce them to a relationship with Jesus before answering the questions,” said first-year missionary Avery Hembrook, admitting that she does not think as analytically as the students — she majored in therapeutic recreation at the University of Wisconsin, La Crosse — but she is happy to learn alongside the students. “I am not engineer minded so we challenge each other.”

When the missionaries first arrived on campus, they helped students move in and attended campus events, Newman Center Masses and other happenings. After this initial outreach, missionaries  begin to organize, facilitate, and train students to lead small group Bible studies. The goal is to bring students closer to Christ and to help students establish and/or deepen their relationships with Christ.

“Through the Bible studies I was able to take an extra step and go a little deeper on a regular basis. I didn’t have anyone challenging me until that moment,” said first- year missionary Michael Newsham.

He was active at his Newman Center at Washington State University, Pullman, Wash., but it was with the FOCUS missionaries who started on campus his third year that he began to understand his relationship with Jesus.

“I had weekly accountability. I had to make time to read scripture and get to know Christ better to build a relationship with him. I didn’t really understand that part of my faith life up until that point.”

Within those Bible studies, FOCUS missionaries welcome students into a discipleship program teaching them how to take the faith out to their friends, lead their own Bible studies, and teach others how to pray.

Fellowship is also an important part of the missionary’s time on campus. Events have included formations nights, men’s and women’s nights, camping, and coffee with the students.

“Events outside the Bible study with students is key to what we do. It allows us to get to know them outside the religious environment and build a relationship with them, so we can help build that relationship with Christ,” explained Newsham. “We make an invitation and have the patience to bear the fruit that only Christ can.”