Three teams of Duc in Altum seminarians and college-age students are heading out into the Diocese of Rapid City to lead summer camps. Fr. Brian Christensen, former vocations director, thinks the program began around 2004 and is patterned after other dioceses’ traveling catechetical programs in the summertime. He said, “Duc in Altum means ‘put out into the deep’ like Jesus tells his disciples to do in the Gospel of Luke. It is a call by Jesus to trust him and to do great things, with his power, for the glory of his kingdom and the salvation of souls. This is the aim behind our summer program.” This year the team is directed by Vocations Director Fr. Mark McCormick. The team members are recruited throughout the school year by reaching out to past members, Newman Centers, young adult communities, and Catholic universities. The team spends 10 days before their mission begins by learning more about prayer, youth ministry, the catechetical topics they will be teaching, and being formed into teams of 4 missionaries. This year each travelling team includes at least one seminarian. The teams travel throughout the diocese spending a full week at each parish they are assigned to. The theme this year is about prayer, where youth will study the Our Father and delve deeper into the great riches of prayer in the Catholic tradition.

Blane Schriock, 23, is the team leader. He attended the University of Mary in Bismarck, ND. He has finished a pastoral year in Spearfish and plans to attend St. Paul Seminary in Minnesota next fall. He said his favorite saint is his confirmation patron, St. Blaise, whom he chose because their names are similar. He said, “My family has always had a farm/ranch background, dating back years being that my family were some of the first settlers in Dakota Territory who settled here from Russia and Germany. I have only one sibling, but my extended family is almost impossible to count with nearly a hundred cousins.”

The team coordinator is Alissa Stephens, 20, from Rapid City. She is currently a sophomore at Mount Marty University, Yankton, pursuing a nursing degree. She said, “One of my favorite saints is St. Dorothea of Caesarea, my confirmation saint. She was nothing but confident in her faith even though it cost her life, and the man who had sentenced her to death ended up converting and becoming a martyr himself after witnessing the sacrificial love that she had for the Lord.” Her family belongs to the Cathedral of Our Lady of Perpetual Help. She has one younger sister.

Reid Murie, 19, will attend St. Gregory the Great Seminary in Seward, NE. He just finished a year of discernment in the La Crosse, WI, Holy Cross House of Formation. He is from Ridgeview, SD. His favorite saint is St. Peregrine because of his absolute trust in the Lord and his faithful service to those on the fringes of society. Murie said, “My family is quite large. My mom had six boys and I’m a middle child.”

Rounding out the team roster is Aubrey Thomas, 17, who is also from Rapid City. She is studying at Ave Maria University in Florida majoring in Catholic theology. Her favorite saint is St. Mother Teresa of Calcutta. She said, “Serving the poor and being there for those in need was her whole philosophy in life which I find so inspiring.” Thomas is the youngest of three sisters and her family attends Blessed Sacrament Church.

The team leader is Josiah Hanson, 21, from Box Elder. He attends St. Mary’s University of Minnesota/Immaculate Heart of Mary Seminary in Minnesota where he is majoring in philosophy. His favorite saint is St. John Paul II. “One of the things that JPII was known for was inspiring young Catholics to strive for authentic greatness. In this way, I aspire to be able to inspire holiness in the way that JPII did,” he said. He is the youngest of five children and his family attends the cathedral parish.

Mary Kinyon, 20, is the team coordinator. She is attending the University of Mary, Bismarck, majoring in elementary education and minoring in Catholic studies.  Her family lives in Rapid City and attends the cathedral parish. “My favorite saint is my confirmation saint, Gianna Molla. I admire her sacrificial love and her work ethic,” said Kinyon. She is the fourth child in a family of five.

Also on the Bosco team is Blase Gebes, from Sturgis. He just completed The Journey Program in La Crosse, WI. He plans to attend Immaculate Heart of Mary Seminary/St. Mary University in Minnesota this fall. His favorite sainthood candidate is Blessed Pierre Giorgio “He was a holy, manly man who stood up and acted on his beliefs,” said Gebes. “My family is very large with seven siblings and we were raised strong Catholics in the extraordinary rite.”

Grace Aho, 22, is from Andover, MN.  She graduated in April from the University of Mary, Bismarck, with a degree in Business Administration and a minor in Catholic Studies. “I’ve always had an attraction to St. John Paul II. I admire his joy and love for the youth, and even after going through so many hardships in his younger life, he showed a profound love for everyone around him. Additionally, his devotion to God is inspiring and the more I read about him and his works, the more I grow to love him,” said Aho. She is the oldest of seven children.

Dillon Johnson, 23, is the team leader, and he is from Rapid City. He is finishing up first year at St. John Paul II Seminary, Washington, DC, where he has been studying philosophy at The Catholic University of America. Prior to seminary, he studied at CUA receiving a bachelor’s in theology. “Since I was young, I was attracted by St. John Paul’s charisma, joy, priesthood, and his relationship with Our Lady. I grew up with a rather small immediate family; it was my mother, father, sister, and I. However, I spent a great deal of time with my extended family, and I hold many of my cousins to be like siblings,” he said. Johnson attended the Rapid City Catholic School System, and his family are members of the cathedral parish.

The team coordinator is Veronica Lang, 21, from Rapid City. She is currently a junior at the University of Dallas in Irving, TX, studying English with concentrations in ethics and Italian. “I’d love to move to Italy for a year so I can work on my Italian speaking skills and hopefully become fluent.” she said. “Ever since I heard about St. Tarcisius, before my first communion, he has been one of my favorite saints. His story about being willing to die for the Eucharist was so vivid to me as a child and has stuck without me ever since!” She is the youngest of five children — all homeschooled. Her family is from the cathedral parish.

Brett Flerchinger, 21, is from Boise, ID. He is studying Applied Mathematics at South Dakota School of Mines and Technology, Rapid City. His favorite saint is St. Augustine of Hippo, who was his confirmation saint. “I respect him for his philosophical writings and general mastery of academics,” said Flerchinger. He is the youngest of four children.

Completing the team roster is Payton Miller, 21, from Rapid City. She attends the University of Mary in Bismarck, where she is studying psychology and Catholic studies (Pre-OT). St. Rita of Cascia is her favorite saint. “Through all of her hardships in life, she only grew more in faith,” said Miller. She is the youngest of four children. Her family attends Blessed Sacrament Church. 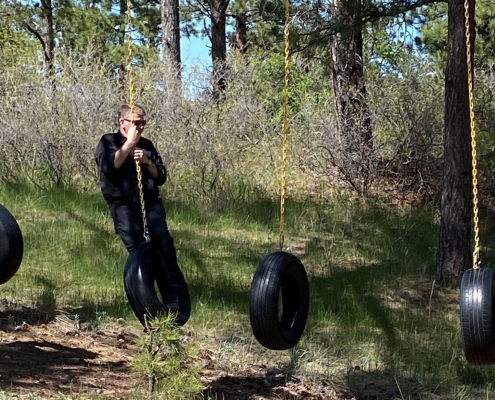 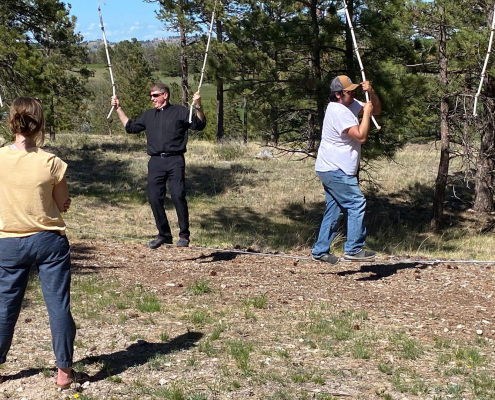 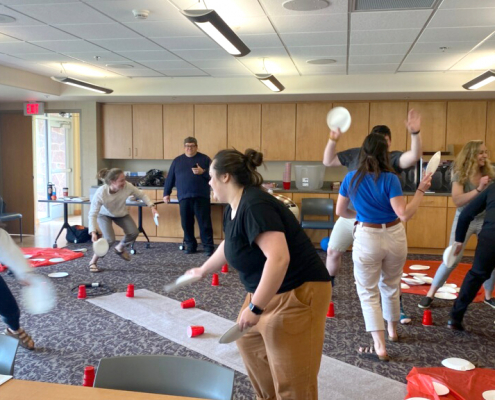 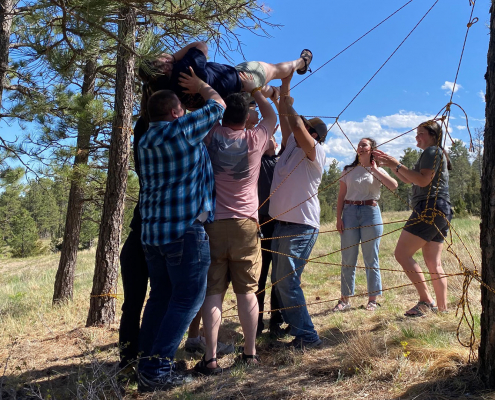