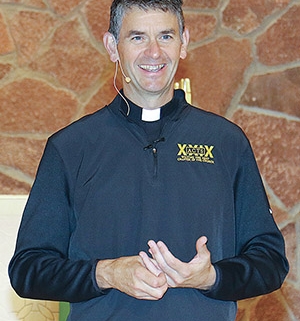 “You are not alive by chance, God could create you to be alive at any point in history, but he chooses you be alive right now. (You belong) in this moment, in this place, with all that is going on,” said Fr. John Riccardo, from the Archdiocese of Detroit.

Father Riccardo calls his ministry “Acts XXIX” referring to the continuing story of the church from where it ends with the Bible book, Acts 28.

In his first presentation, “Created,” he explained the world is crying. For the first time since 1918 there has been a consistent drop in life expectancy for three years in a row. He attributed that to deaths of despair — rising rates of suicide, cirrhosis of the liver in 20 and 30-year-olds and the opioid crisis.

“The beauty of the Gospel is the message itself can change lives,” said Father Riccardo citing the healing, freedom, wholeness and salvation it brings.

“These are great days to be alive — not boring. God has equipped you with anything you need to be instruments in his hands so as to share the Gospel.

“You want happiness and God has a monopoly on happiness,” he said.

According to Father Riccardo, the two accounts of Genesis, which are not literal, they teach us there is just one God and he created us effortlessly. “We are made in his likeness which means we are made for friendship, to be loved and to love. People are made to be divinized,” he said.

After listening to Father Riccardo and then spending time in prayer, a young adult  participant said, “I became aware of the fact that I have many people that I hang out with, but no one that I would call a close friend. I felt a loneliness that I hadn’t allowed myself to feel and now I feel God encouraging me to seek out more authentic friendships.”

In his second presentation, “Captured,” Father Riccardo explained the origin of the devil and his mission on earth. Satan is a fallen angel cast out of heaven because rebelled against God. The priest explained the “fall of man” in the Garden of Eden and its consequences. Quoting from the book of Wisdom 2:24, he said, “through the devil’s envy death entered the world.”

He said Satan’s tactics include accusing, lying and dividing with the ultimate goal of separating people from God’s love. He went on to name several of the devil’s lies:

“I’m not worth anything.”

“God’s not your father —he’s not even

Father Riccardo said, “God wants to expose the lies, expose what Satan is doing in your life.”

Participants were given time for adoration and reconciliation. They were asked to pray and reflect on Satan’s lies in their lives.

More than 50 volunteer ambassadors helped guide people through the day. One of them told Shawna Hanson, director of the Office of Stewardship, as Father Mark McCormick walked past her carrying the monstrance “I felt Jesus say to me ‘I love you so much.’ Those words came into my heart with such tenderness, that tears filled my eyes. It was several minutes before I regained my composure.

“How did that encounter change me? I desire more than ever before to spend time with him in prayer, and to sit before him in the Blessed Sacrament — what a beautiful gift!”

A participant explained how she was touched during the reflection period, “Five years ago, I lost a daughter to suicide. The last conversation we had was an argument. We were both so angry and I have carried so much grief, sorrow, regret and guilt since then.

“I woke up on Saturday and didn’t want to come to the Summit, but a gentle voice came to me saying, ‘when you don’t want to go, that’s when you really need to go.’ All day the Lord was gently nudging me, ‘don’t take notes, just listen’ and ‘go get in the line for confession.’

“Once in the confessional I shared that I had this grief, this guilt that I just couldn’t shake.

“‘Unnatural death is hard,’ the priest said.  I don’t remember what else he said but it was so peaceful, warm and loving — it was the voice of Jesus.  ‘Your daughter loves you, Momma. She forgives and she is with Jesus.’ I left feeling surrounded in warmth and love as if I were wrapped in a cozy blanket.” She said she intends to share the love she felt from Jesus that day.

In his third presentation, “Rescued,” Father Riccardo asked the question, “What, if anything, has God done about our situation? This is God’s shocking unexpected response to sin. We take for granted maybe, that our situation is not hopeless. Your life would be utterly meaningless, stuck in frustration, if God had not done something.”

Explaining God entered into his creation through the incarnation of Jesus, Father Riccardo said, “God became a man to fight, to go to war, to rescue the creature that means the most to him — you,” he said. He came to destroy the works of devil.

Father Riccardo had an insight into the crucifixion during a time of prayer. He came to understand Christ as an “ambush predator” — a creature that lies still, camouflaged, and pounces on its prey.

According to Father Riccardo, Jesus sweats blood, he is arrested, chained, slapped, judged, stripped, scourged to the point of death, and nailed to a cross — all for the purpose of attracting his prey.

“He is trying to entice death to himself. This is how the early church understood the passion. God wants his creation back, that’s us. The enemy comes close to mock and taunt him,” he said.

Father Riccardo pointed out that through the passion Christ shows us how much he loves us. Jesus absorbed every human sin making the atonement for us. Beaten, scourged and stripped before being nailed to the cross, He paid the price to make us right with God.

“What are the results of the passion?”

asked Father Riccardo. “He has destroyed death, transferred us, recreated us, rendered sin impotent, humiliated the enemy, gave us authority over the enemy and sent us on a mission to get his world back.”

Father Riccardo said, “Whatever hell you’re in, take his hand, he is utterly unconquerable, and he can deliver you.”

A Mass and a healing service followed the presentations. “The Summit  was amazing. I loved the message and healing Mass.  I have never been to that before and it just rocked me. Amazing!” said a participant.

(Shawna Hanson contributed to this story.) 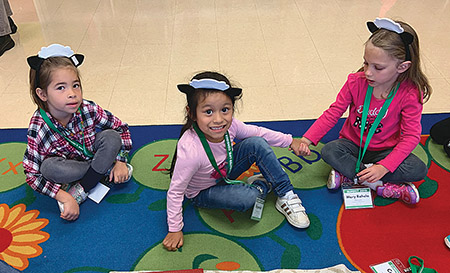 Beata Oszwaldowska, Najeelah Rodriguez and Mary Rahela Pelayic wear little sheep headbands and learn to follow the Good Shepherd. One catechist said, “Thanks so much for letting me help with the Youth Track this weekend. I had so much fun! Those little ones are so funny!” (WRC photo by Laurie Hallstrom) 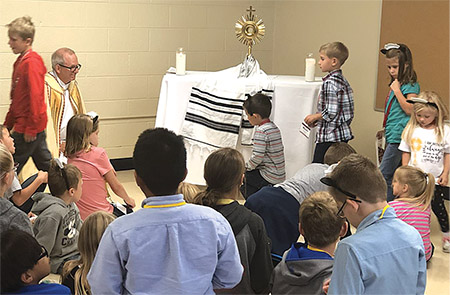 Deacon John Osnes of Piedmont, led the children in adoration. A catechist explained, “During Adoration with the children we shared the story of the woman who touched Jesus’ cloak and was healed. We asked them to think of someone they knew who needed healing and to ask Jesus to bring healing to them. We also told them that the woman’s illness made her an outsider, no one would be her friend or talk to her. Then they thought of someone they knew who didn’t have friends. After some quiet time, they came up close to the monstrance, one-by-one and prayed for these people. They gently touched the Jewish prayer shawl we had wrapped around the monstrance. The reverence and sincerity that these children showed touched my heart deeply. It brought tears to my eyes.” (Photo by Shawna Hanson)