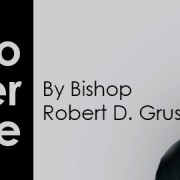 “Native students racially harassed, sprayed with beer at Rush game.” This was a headline in the Rapid City Journal back in January — a description of awful racism and a violation of human dignity. My heart goes out to those young people and the adults with them who experienced such behavior aimed at them because of the perpetrator’s ignorant objection to their ethnic background. The actions against these young people were despicable. No one should ever have to experience any form of racism or intolerance.

We can pick up a newspaper or turn on the news daily to find that others have also experienced some form of racism or discrimination, whether that be in South Dakota against the Native American population, across the nation in African-American communities or around the world. This serious violation of the dignity of a human person exists in every part of our world today. There can be no denying it.

Yes, we have come a long way since the days of slavery and the civil rights movement. Progress has been made, but as we have seen, there are still many reminders that our communities have much healing yet to do. There is still a long way to go in eradicating this sin: “a sin that divides the human family, blots out the image of God among specific members of that family, and violates the fundamental human dignity of those called to be children of the same Father.” (Brothers and Sisters to Us: U.S. Catholic Bishops’ Pastoral Letter on Racism, 1979)

I recently read an article written in 1977 by Bishop James A. Griffin entitled, Racism: A Tarnished Reflection of Ourselves. An interesting title – A Tarnished Reflection of Ourselves. Our true selves are hidden when hardened hearts are absent of God’s love, and we are not aware of our true identity in Christ. Racism or any other form of hatred is indeed a reflection of what lies in the human heart. Murder, hatred, malice, envy and pride, among other motivations for evil, have their source in the human heart. This is precisely why Jesus calls us to conversion, regardless of how holy or righteous we may think we are. The heart must be continually purified so that it is no longer controlled by fear or the spirit of domination, but by openness to others, regardless of their race, color, social conditions, language or religion.

In the Catechism of the Catholic Church, we read: “The equality of men rests essentially on their dignity as persons and the rights that flow from it: Every form of social or cultural discrimination in fundamental personal rights on the grounds of sex, race, color, social conditions, language, or religion must be curbed and eradicated as incompatible with God’s design” (CCC, #1935). We must never do anything, as individuals or a society, that is incompatible with the love of God and neighbor. The teaching of Jesus Christ, “you shall love your neighbor as yourself” (Lk 10:25-37), is intended to be inclusive, extending even to those whom we may reject because of their ethnic or racial differences or their nationality.

Our faith teaches us that every human person is created in God’s image and likeness. It is from God that we have received the inherent dignity that is ours — the dignity which no one can take from us. The Pontifical Council for Justice and Peace wrote, “Christians in particular have the responsibility to offer a teaching that stresses the dignity of every human being and the unity of the human race. If war or other terrible circumstances make others the enemy, the first and most radical Christian commandment is to love that enemy and to respond to evil with good. (The Church and Racism: Towards a More Fraternal Society, 2001, September 2001)

As Catholics and responsible members of our society, we are obligated to do our part to eradicate racism in all its forms. But if we are to remove the sin and crime of racism from our communities, we must begin with the self. All social sin begins in the choices of individuals to be unjust and is sustained by our blindness to those choices. Whatever lies in the depth of our hearts will eventually appear in those choices, for good or evil. As St. John says, “If we say, ‘We are without sin,’ we deceive ourselves, and the truth is not in us” (1John 1:8). We can say the same thing about prejudices. They are a part of all of us, though we may never have faced them honestly.

Yes, it may seem that the world is still far away from eradicating racism. Yes, it remains in need of healing. Now is a perfect time for some soul searching regarding our own prejudices and biases. Perhaps in prayer, we ask Jesus to help us to see the “tarnished reflection of ourselves” so that healing may take place in us first. But he also wants to reveal our true reflection, so that we can see who we really are — someone precious, someone beautiful, someone for whom he was willing to die. If we do not see the true dignity in ourselves, it will always be difficult to see the true dignity in others.

We all know that it is complicated issue. But for true peace among all people to become reality, as challenging as is may be, in order for forgiveness and reconciliation to take place, the evil which has been done must first be acknowledged and, as far as possible, corrected.

A respect for truth is necessary. “Lying, untrustworthiness, corruption, and ideological or political manipulation make it impossible to restore peaceful social relations. Hence the importance of procedures which allow truth to be established. Such procedures are necessary but delicate, for the search for truth risks becoming a thirst for vengeance.

“To the requirement of truth there must be added a second: justice. For ‘forgiveness neither eliminates or lessens the need for the reparation which justice requires, but seeks to reintegrate individuals and groups into society, and States into the community of Nations.’ Such justice must respect the fundamental dignity of the human person at all times.” (The Church and Racism: Towards a More Fraternal Society, 2001, September 2001, n.11)

Reconciliation is also demanded. “No process of peace can ever begin unless an attitude of sincere forgiveness takes root in human hearts. When such forgiveness is lacking, wounds continue to fester, fueling in the younger generation endless resentment, producing a desire for revenge and causing fresh destruction.” (John Paul II, Message for World Day of Peace 1997, n.1)

Regardless of the challenges, the church must continue to proclaim the way of pardon because of her unshakeable confidence in the infinite forgiveness of God. Eliminating racism off the face of the earth may seem impossible for any one of us or even for the whole church. Therefore we place our trust and hope in the Lord. We pray for a new outpouring of the Holy Spirit upon us, the world and all societies, so that the fruits of the Spirit — joy, peace, patience, kindness, generosity, faithfulness — may break down evil and violence, destroying the walls of selfishness, intolerance and hatred, thus building a world we have never seen before — the true Kingdom of God.