News
You are here: Home / News / WRC Archives / Diocesan Youth Rally — You were put on earth so people can know God through y...

“You can have everything you ever want but you still have a gaping hole in your heart if you don’t have God,” speaker Jackie Francois said to a group of 110 middle school students and parents. “It doesn’t matter what your circumstance is. If you don’t have God in your life as the foundation of your life, you’re always going to be missing something. Always.”

Francois was one of the speakers at the Diocesan Youth Rally held in October at the Terra Sancta Retreat Center. Francois and Chris Mueller teamed up to address more than 200 middle and high school aged students from across the diocese. The day included Mass, adoration, games, and witness testimonies from seminarians and fellow students. Francois spoke to the middle school session about love and being open to putting God at the center of your life.

“God wants more than one hour a week. He wants all of you,” she continued. “The most powerful words you can say are ‘I need you.’ If you wake up every morning and say, ‘God I need you because I can’t do this on my own.’ God will say, ‘Okay I will be with you always. I will never forget you.’”

At the end of her session, Francois pointed to an image of the crucifix and

reminded the middle school students that his death was a wedding proposal to all of mankind.

“You have two options — you can either say, ‘I’m going to live for you and die for you’ or you can say, ‘no thanks.’ There is no maybe.

During the men’s session, Mueller addressed strength and encouraged both middle school and high school students to be a defender and stand against hell.

“As men, we were given anger. We tend to think that’s terrible, but no your anger was given to you for a purpose,” he continued. “Jesus shows us who we are supposed to be.”

Using Adam and Eve, he explained how the devil took a small truth and made it seem extreme by convincing Eve that it was only one tree and it wouldn’t matter if you ate from that one tree.

“When Adam took the apple from Eve, he chose her over the Lord. The devil made man submissive,” Mueller explained. “What Adam should have done is grabbed the snake and choked the life out of him.”

The session concluded with a group discussion that focused on thinking about where they can help each other stand up to the devil and mirror God.

“Where are you holding back your strength? How can I bring my strength to it? What are you allowing to happen that you know you shouldn’t? You were not put on the earth to be passive,” Mueller asked.

“Don’t be like Adam and watch Eve eat the apple,” he said. 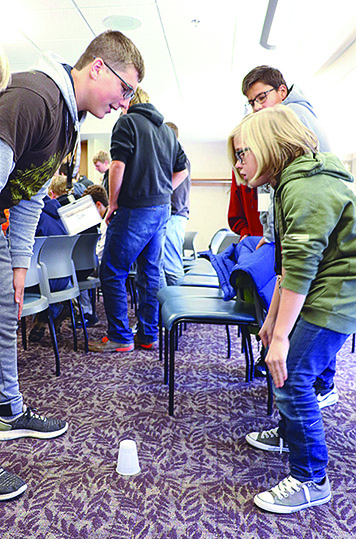