News
You are here: Home1 / News2 / Uncategorized3 / To the devil even moderately faithful Catholics stink 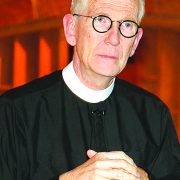 Ghosts, the devil and witchcraft — topics Catholics should be aware of, were the subjects of a lecture open to the public given by Fr. Dennis McManus, an exorcist. He spoke May 24 at Terra Sancta, Rapid City. He was in the Diocese of Rapid City to address the clergy at their annual Clergy Convocation.

Father McManus began by explaining ghosts are essentially souls of humans separated from their bodies after or near death. “Our nation has a thing about magic, witchcraft and ghosts,” he said. “All together there are 32 shows on television about ghosts, zombies, dead people or (demonic) possession.”

He commended Pope Francis for talking frequently about the devil. “What he wants us to know as Catholics is that the devil is a real individual. The devil’s biggest trick in the modern world is to fool us and make us think he doesn’t really exist,” said Father McManus. “If you don’t believe in the devil, you pretty much are a sitting duck for him to be able to do with you what he wants. If we are aware of things we are less likely to be manipulated or fooled by them.”

He cautioned the audience not to be “all jittery sitting home and worrying the devil is going to come visit.” According to McManus, “The devil is not God. He doesn’t have God’s powers. You are a baptized person, (if) you live even a modest Catholic life, go to church occasionally and say your prayers, you stink to the devil. The devil doesn’t hang around Catholics or Protestants or Jews who love God.”

Since the Civil War, the south is full of haunted houses below the Mason Dixon line. “The first thing we have to think about is ghosts are not demons or devils. Ghosts are the souls of the faithful departed whom God has allowed to be in touch with us who are still alive — usually in the place where they lived or died, or did something wrong. Ghosts ask for help to make things right, for the forgiveness of sins,” he said. “Almost all cases of hauntings resolve themselves once a priest has come and said Mass in the place where the ghost was.

“When Mass is offered just for the soul of that one person, they are set free, and off they go to paradise because Mass is the great sacrifice of Jesus himself. Our salvation was purchased by the blood of Jesus.”

“Ghosts for the Jews had only one purpose — to get revenge. The apostles are screaming and afraid. They figure Jesus is angry with them and has come back to get even,” said McManus referring to the betrayal by Judas and Peter denying he knows the Lord. On the day of the resurrection, 500 ghosts rose from the dead and walked through Jerusalem.

“God needed the Jews to see Jesus sets the dead free,” he said.

“How many times in your life have you lost someone, a husband, a wife, God forbid a child, brother or sister, and you have dreamt of them?” he asked. “Occasionally we have seen them especially at the time of their death. They come to say goodbye and to ask for prayers.”

Using his nickname for the devil, he said, “Old Red Legs has nothing to do with ghosts. He can’t get his hands on ghosts even if he tried because ghosts are already in purgatory — on their way to heaven. God allows them to ask the church for help in this entrance to heaven. There are a million entrances into the dark kingdom and only one into heaven.”

Father McManus recounted the story of two high school girls who brought him a Ouija board they had been using for a year. The planchette was starting to move on it’s own without their hands. When he recommended they quit using it, the girls refused saying they used it to learn “secret stuff.” They were addicted to the flow of information and couldn’t stop. He offered to fix it for them and got out a hammer and smashed it. They protested.

“It won’t bother you again,” he said. “What I wrecked is your dependency. I’m warning you whatever moves something by itself is no friend.”

He continued his talk discussing witchcraft, which is prevalent in many cultures.

“In my part of the world, in Mobile, Ala., it’s voodoo. To get even with somebody, go to a voodoo witch — ‘that guy cheated me out of money,’ ‘that man took away my son,’ ‘that woman wrecked my marriage …’”

Bishops will call him, all shook up, when churches are vandalized. He explains that is a rite of passage for a coven. Father McManus said the number of covens is growing attended by white American lawyers, doctors, ministers, professors and businessmen worshiping Satan. “There are now more covens than there are parish churches, convents, schools and clinics put together,” he said. “They promise you whatever you like — drugs, sex, booze, money, jobs, position, anything. It’s all on condition that you do what you are asked to do at a future date.” That could include theft or murder.

The exorcist concluded with possession. It occurs when a human consents to form a long-term relationship with a demon.

Exorcism puts an end to the relationships between demons and humans. The person has to reject, renounce and rebuke what ever it is they are supplying.

“Then the power of Jesus can come in and break the bonds,” he said. “If you go to hell it was your choice. God will use any little scrap of our life to make sure we won’t go to hell.”