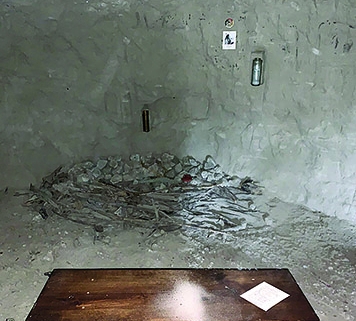 A look inside the shrine to Nicholas Black Elk that Red Cloud students created. It is on a little patch of land outside of the school in Pine Ridge. (Photo courtesy Red Cloud Indian School)

Diocesan update on canonization cause

“We are basically waiting for the thumbs-up from the Holy Father, Pope Francis!” says Fr. Joe Daoust, SJ. “I am hopeful that Nicholas Black Elk is declared Venerable soon!”

Now that the final reporting from our diocese was sent to Rome in June of this year, in hopes of continuing the canonization cause, the Black Elk working group has begun the task of promoting and furthering the cause of sainthood.

Many people are still learning the levels of deep respect that Native Americans have for family values.

explained that the word chief has other meanings to the Lakota. Although never technically a chief — someone who is a leader in the military, designated by rank, etc. — Ben Black Elk, Nicholas’ son, and his family bestowed the honor of chief to Nicholas because he was a humble Lakota and because of people’s devotion to him.

Black Elk is alive and well across the country, in South Dakota, at Red Cloud Indian School, and on the Pine Ridge Reservation. We must continue to bring that education and excitement to the world around us. The children at Red Cloud have built a shrine/grotto to Black Elk on a little patch of land outside of the school in Pine Ridge. They also have several school activities planned. Bill White is developing a talk for school children.

John Corry, a layperson from St. Katherine Drexel Parish in Beaver Damn, Wis., promotes Nicholas Black Elk at every Mass he can. “I have a spiritual affinity, for some reason to Nicholas Black Elk,” he says. “I believe in the communion of saints, so I always add Nicholas and ask him to pray for me.” He goes on to say that he prays for Black Elk intentions for several others who are having health challenges. “Miracles happen everywhere, why not here in Wisconsin?” he said.

How can you help further the cause for Canonization of Nicholas Black Elk?

1) Pray. Through your prayers for the successful carrying out of this canonization process and by praying to him for his help in any distress so that all can walk the good red road toward God.

2) Evangelize. Spread the devotion to him as an exemplar of Native American

holiness, bringing the gifts of the Holy Spirit in indigenous spirituality forward in the church.

3) Donate. You can help the Nicholas Black Elk Fund in the diocese of Rapid City which was established to help cover the costs of carrying this process forward at www.rapidcitydiocese.org under the “Make a Gift” tab. Please designate your gift to Nicholas Black Elk.

“Nicholas — pray for us as we open our hearts to recognize the risen Christ in other cultures and peoples, to your glory and honor” (from prayer for the Canonization of Nicholas Black Elk).

What does a Vice-Postulator do?

Once Nicholas Black Elk is declared venerable the vice-postulators will represent the Postulator, Father Luis Escalante, in carrying out any investigation and anything necessary to further the cause of Nicholas Black Elk. This includes talking a closer look at miracles and items attributed to Black Elk. Vice-postulators can include people from the diocese and other interested parties from across the U.S.