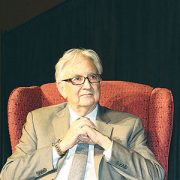 Thompson was instrumental in getting St. Thomas More High School started in 1991. Before the current building was completed in 1995, classes were held in the basement of National American University. He worked as a principal, superintendent and fundraiser for a new building.

Three people gave testimonials on behalf of Thompson. Barbara Honeycutt is the current Superintendent of the RCCSS. She previously served in the development department for the schools when Thompson was superintendent.

She roasted him on the conditions of the new Catholic high school: “In the fall of 1993, my family and I moved to Rapid City from Grand Island, Nebraska. It was important to us that there be a Catholic School System in the town we relocated to. I learned about St. Thomas More High School and we decided we had found our new home. When I inquired about the school I don’t remember being told at that the students ate lunch on the floor in the hallways, that every clock in the building had a different time on it, or that students had to crawl over their desks in Wayne Sullivan’s math class in order to be seated.”

His daughter, Kara Thompson, who teaches at William and Mary College in Williamsburg, Virginia, spoke second. She was attending with her sister Tammy and brother Brian. (Their brother Kevin passed away in 1986.) “I am a 1996 graduate of St. Thomas More. Msgr. O’Connell was a dear member of our family, of Kevin’s especially. The Founder’s Award contains special significance for all the Thompsons.”

She lauded her father’s sense of fairness and justice and his work toward seeing underprivileged students get a Catholic education.

Jim Kinyon, executive director of CSS, and Susan Raposa, president of the CSS board, presented the Founders Award.

When Thompson took the stage he thanked Honeycutt and her staff for keeping the school going.

He thanked his children for coming and his wife of 55 years, Judy, for keeping him going. “This award acknowledges that by the grace of God and the hard work of hundreds of people great things can be accomplished and continued,” he said. “It means so much because in reflecting on the life and spirit of O’C what better priestly model of Christ to the community of the faithful could we have than O’C? He’s a very special member of many families here I know, and certainly of ours,” said Thompson. He recalled all the support Msgr. O’Connell had given his family — especially when his son Kevin had gone through treatment for Ewing’s sarcoma of the spine.

Garvey said, “Most universities promote the idea that there are no good or bad choices. I am the judge of my own good; you are the judge of yours. If you mean to do good, that’s what matters most.”

That brings up two areas of concern — moral ambiguity and moral complexity. He gave examples of moral ambiguity themes promoted in pop culture. One is where physician assisted suicide is looked at as heroic and another where non-traditional family structures are held up as just as good as old-fashioned ones. In contrast, he used the Catechism and teachings of Pope Francis to illustrate Catholic moral tradition offers clear counter-cultural answers.

For moral complexity, he addressed a personal issue — the decision to attend a family wedding wherein a person had not gotten their previous marriage annulled. There was a lot of family discussion on whether attending would give young family members the impression they approved of the union. Garvey said he attended and was following Pope Francis’ position on staying close to a person in a messy real life situation. When the time was right, family members encouraged the groom to get an annulment and then be married in the church. Which is what happened.

Garvey said, “The Holy Father says to error on the side of charity. In Francis’s words, “Heal the wounds and warm the hearts of the faithful.’”