News
You are here: Home / News / Uncategorized / We can make God’s love and kindness real 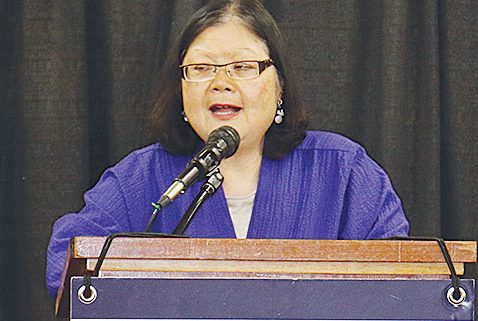 “The people we serve on average make less than $1.25 a day. They are the poorest of the poor and they live in fragile situations,” said Dr. Carolyn Woo.

More than 800 people gathered in Rapid City for the Catholic Social Services Palm Sunday Brunch, the charity’s largest fundraising effort of the year. The guest speaker, Woo, served as president and CEO of Catholic Relief Services From 2012 to 2016. The international relief agency was established by the United States Conference of Catholic Bishops, Washington D.C., after World War II to help refugees. The agency will have its 75th anniversary in 2018.

Woo’s family emigrated from Hong Kong. She attended Purdue University, West Lafayette, Ind., where she earned her bachelors, masters and doctorate degrees and she was a member of the faculty. She served as dean of the Mendoza School of Business at Notre Dame University, Notre Dame, Ind., before joining CRS.

She said CRS partners with 1,200 organizations across the world and 600 of those are Catholic. Workers are active all over the globe in about 100 countries. In the countries where CRS workers are, they are not allowed to evangelize, or they would be killed. “Our role is to let people know what Catholicism is all about — it is by the way we love, by the way we treat each other. That is the good news. We are people who can love and care and we actually make the choice (to share) it,” she said.

“People ask if I am depressed with my work and I just want to say, ‘on the contrary.’ There is a lot of suffering, sometimes I feel like we are sent to the foot of the cross,” said Woo. “We are face to face with suffering people — children who are hit by shrapnel and have no access to care. We run into people who have been trafficked, women whose daughters were captured and sons were killed. We are often visited by women whose children died of malnutrition. There are a lot of crosses people bear. But I am not at all depressed.”

She explained that at the foot of the cross, after the horrific torture, the suffering and the crucifixion, the good news began.

Woo led a retreat with Sisters of the Holy Cross, Notre Dame, on the feast of the Annunciation, March 25. She shared that message about the invitation from God. “He invites not only Mary, but God invites us to be a part of the plan of salvation. He hopes sometimes we say ‘yes,’” said Woo. “God issues invitations each and every day, to make his kingdom known, to bring about salvation.”

In December, as she was finishing her work at CRS, she told her colleagues, “What is the work that we do? What is our role in God’s plan? We are the answers to people’s prayers. It sounds so arrogant — it is not meant to be. The reason I say that is the people we work with don’t have a home, food, or medicine. Sometimes they don’t have money and they pray, whatever religion they are, they say ‘God please send help, please send food and medicine, my child needs milk.’

“Somehow, when we show up that’s what we bring. It is more than formula, food, shelter, and medication; we also bring longer term solutions as you do in Catholic Social Services. We bring a way for people to find a new path, to rebuild their lives.”

Woo explained sometimes social work is tangible, someone needs something and it can be given to them. “Not all needs are tangible — the deep need of loneliness for example, low self concept or a sense of having no hope, those things are not always tangible; but we are sitting next to people (family and coworkers) who could benefit from kindness,” she said. “Prayers are made to God, we have a chance to be working as God’s answers.

“The fact that we are given a chance to be God’s answer to people’s prayers is really an incredible privilege,” said Woo. “I think that the whole idea of witness is making God real. Each of our roles is to make generosity and love real. When we do that we are emulating God. That’s how people come to believe in God.”

Abide in Me: Building the kingdom of God in your zip code
Scroll to top