News
You are here: Home1 / News2 / Uncategorized3 / Called to live the life of solitary prayer a hermit chooses a quiet Piedmont... 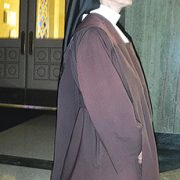 Immaculate Heart Hermitage is a new home for Sr. Mary Catherine Jacobs who will reside in the Diocese of Rapid City as a hermit.

Originally from Ralph, she entered religious life at age 18 at the Carmel of Mary Monastery at Wahpeton, N.D. It is a cloistered contemplative order with a devotion to imitating the Blessed Mother.

“Mary is very much a part of my life,” she said. “Every grace I received came to me through her hands.”

The monastery in N. D. was founded in 1954, the Marian year. “I was there 30 years and began to know the eremitical calling (to become a hermit) around 1986. Vatican II talked about going back to your roots so I felt very strongly that I was being called back to what we lived in the origin of the order.

“Reading the Holy Father’s encyclical on “Rich in Mercy,” St. John Paul II speaks of conversion to the father as an experience of knowing the trinity dwells in every soul.

“I felt called to a life of prayer. You can reach into everybody’s heart by prayer,” said Sr. Mary Catherine.

She first explored the hermetic life in Chester, New Jersey. She also lived in communities in Texas and a new community starting in Brazil. After much contemplation she discerned her calling was to live not in community, but as a solitary hermit.

She talked to Fr. Dan Juelfs, who used to be a neighbor at Ralph. He said he would speak with Bishop Robert Gruss. After interviewing her last fall and reviewing her references, the bishop gave his consent for establishing a hermitage. This is new to the diocese, so the Handbook for Hermetic Life was adapted from the Diocese of St. Cloud, Minnesota. The bishop appointed Fr. Leo Hausmann, director of Eremitic Life. Fr. Mark McCormick is her spiritual director.

“My hermitage is not a place where I get away, it’s where I meet the whole world in prayer and in Christ, because Christ prays for everyone. It’s almost like an infinite vocation — not limited to time or space, nobody is excluded. The whole world is in there from the beginning of creation until the end because God is there,” said Sr. Mary Catherine.

“We are each individuals and are to have a personal and intimate relationship with the Lord. The hermit is to be an icon of the time we are to be personally relating to the Lord,” she said. “I live in silence and solitude and that is to some degree everybody’s calling. The hermit is to be an intercessor, to let Christ pray his prayer through her, that’s what we all seek.”

She will make her temporal eremitic vows at 11 a.m. Mass on June 29 at Our Lady of the Black Hills, Piedmont. She attends daily Mass there and at St. Martin Monastery. The church has a box set up for prayer requests and prayer requests can be sent to her at smcjacobsocarm@gmail.com.

According to diocesan policy, hermits residing in the Diocese of Rapid City are required to be self-supporting. Sr. Mary Catherine partially supports herself by painting and selling icons and painting artwork for Christmas and Easter cards, bookmarks and holy cards. To view her artwork for sale, go to Land of Carmel Art Inspirations at carmelartinspirations.com. She also sews Mass linens for the Carmelites in Wahpeton in order to bring in money.

Immaculate Heart Hermitage has been established by Sr. Mary Catherine as a non-profit organization in the State of South Dakota with a board of trustees so that she can receive donations to help support herself and her ministry. For anyone who would like to inquire about how they can support her ministry, please contact her at smcjacobsocarm@gmail.com.