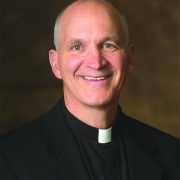 May the Lord be at your side as you shepherd the faithful in the Diocese of Cheyenne, Wyoming
Bishop Robert D. Gruss, the Clergy and People of the Diocese of Rapid City
Click here to see the special section from the West River Catholic.

By Laurie Hallstrom
When a diocese becomes vacant because the bishop has been moved, retired or deceased, the Holy See looks for a man whose gifts and experiences are best suited to serve the particular needs of that local church. In the case of the neighboring state of Wyoming, the priest selected grew up on a farm-ranch, has driven many rural highways, lived in a very similar climate, served on a Native American reservation, and worked in a post energy boom town where the mines were closed.

Fr. Steve Biegler was born on March 22, 1959, in Mobridge. His family owns a farm-ranch operation near Timber Lake. His parents are Alfred (deceased) and Mary Biegler. He has six brothers and six sisters, including Rhonda Nickerson, who passed away July 9, 2010.

Growing up in Timber Lake, he attended Holy Cross Catholic School. He recalls that vocations were discussed at home. “My parents were always supportive if one of us were to have a religious vocation. I had a good family of prayer and faith and I see that as central to my vocation,” he said. “Fr. Jerry Scherer is my mother’s first cousin and he was close to our family. He stopped by a lot. With the school we had the Presentation Sisters out all the time and we would invite the parish priest, too.”

He graduated from Timber Lake High School in 1977. He attended the S.D. School of Mines and Technology in Rapid City for one year, 1977-78. “I took a day to think about life and seminary came to mind. I said, ‘Not right now, I’ll have to think about that.’ I was also considering ranching and having a family and those thoughts were part of considering the priesthood and celibacy,” said Bishop-elect Biegler.

Most of the next eight years, he worked on the family farm. “We had radios in the tractor, but I would often just turn the radio off. That was a really powerful place of meeting God in the beauty and quiet of nature,” he said, adding, “It was wonderful time for prayer and discernment.”

When he felt he needed a change, “I left for a little bit and went to Wyoming and worked with a construction crew filling in old underground coal mines around Glenrock near Casper. They had slurry of gravel and a compound similar to concrete. They were trying to stabilize those mines because they were caving in under the town.

“The priest in the town was the vocation director for the diocese, so I did end up talking to him a little bit,” said Bishop-elect Biegler.

He attended Immaculate Heart of Mary Seminary and St. Mary College in Winona, Minn., from 1986-89 and graduated with a bachelor’s degree in philosophy. From 1989-1993, he attended the North American College in Rome where he received an STB or Bachelor of Sacred Theology at the Pontifical Gregorian University. He was ordained to the priesthood for the Diocese of Rapid City at Holy Cross Church in Timber Lake on July 9, 1993.

“I went back to NAC as a faculty member from 2003 to 2006, and stayed another year, 2007, and finished a biblical theology degree,” he said. From the University of St. Thomas in Rome he received an STL (License in Biblical Theology).

In 2010-11, he served as Diocesan Administrator following the departure of then-Bishop Blase Cupich for his appointment as Bishop of Spokane, Wash., until the ordination of the current ordinary, Bishop Robert Gruss. “I had some experience of overseeing the diocese during that year, going out and doing confirmations — which a DA does, and I learned about the workings of the diocesan staff,” he said.

Bishop-elect Biegler said he will miss this diocese, family members, friends he has made at parishes where he served, and what he describes as “a great fraternity of priests.”

“For me, I’ve come to know that priesthood is where I belong and obviously it’s demanding but it’s so fulfilling, such a great life of journeying with people in their faith. So I’m excited to continue that journey. I’ll continue it there. I am looking forward to getting to know the people and priests as a bishop,” he said.

He already knows a few people in the diocese; his brother Royce Biegler and his wife, Kim, live in Gillette, and several nieces and nephews are in Wyoming. Fr. Steve Titus, the vocation director for the Diocese of Cheyenne was in Rome as a seminarian when Bishop-elect Biegler was a faculty member. Also, Fr. Andrew Kinstetter was a student at the School of Mines when Bishop-elect Biegler was the Newman Center Chaplain.

His episcopal ordination will be June 5. The West River Catholic will carry more details in the April issue.

(Editor’s note: Fr. Biegler is the second diocesan priest to be named a bishop. In 1978, Fr. Lawrence Welsh was named Bishop of Spokane. He later served as an auxiliary bishop in the Archdiocese of St. Paul/Minneapolis.)

Bishop Robert Gruss was a seminarian at North American College in Rome with Fr. Steve Biegler. As diocesan administrator he was the first from the Diocese of Rapid City to greet Bishop-elect Gruss when he arrived in Rapid City.

Fr. Steve is a very competent and gifted pastor. He has the many gifts necessary to shepherd the people entrusted to his care. I have always found him to be very wise and discerning. He has a good mind which allows him to look at a situation, dissect what needs to happen, and provide great insight into the solutions. He may not enjoy administration (many of us don’t, myself included), but I think he is good at it. He has many gifts which will be an asset as he begins this new assignment in his life.

While I hate to see him leave the Diocese of Rapid City, I am honored and grateful to have Bishop-elect Biegler as a fellow bishop and a part of the Episcopacy. The church is enriched as a result of this assignment for him. I look forward to sharing this ministry of the wider church with him.

Anytime you lose a priest of his caliber, it is a great loss. He will be deeply missed in the Diocese of Rapid City, both as my vicar general and as a great pastor. And given the shortage of priests that we are currently facing, it makes this loss even greater. But just as the Holy Spirit led him to this new ministry in the Church, the Spirit will continue to provide for the Diocese of Rapid City. Of this I am certain.

I wish Bishop-elect Biegler only the very best in his new assignment and ministry. He will touch the lives of many people in the Diocese of Cheyenne just as he has touched the lives of many people here in the Diocese of Rapid City. He is such a gifted man and his deep love for the Lord and for the poor and less fortunate will envelop his life and ministry there as well. He can be assured of my prayers as he transitions to this new phase of his life and priesthood.

Join youth and young adults from around the country for a pilgrimage to Washington D.C. to participate in the Annual March for Life on Friday, January

Join youth and young adults from around the country for a pilgrimage to Washington D.C. to participate in the Annual March for Life on Friday, January 21, 2022.

This year we have a special opportunity to participate in the Students for Life National Pro-Life Summit  on Saturday.

The pilgrimage is open to all high school and college-age students.

Cost: $600 (includes bus trip, hotel, snacks, entrance to the rallies, and an unforgettable experience witnessing to the sanctity of life.)