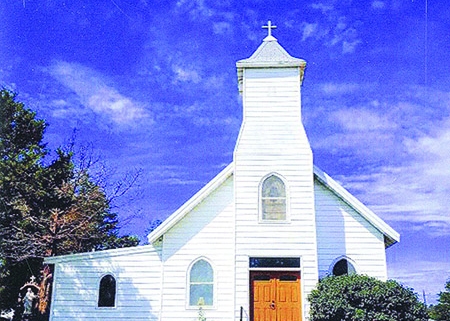 Masses in White River began as  early as 1885 and were offered in private homes and mission churches by missionary priests from surrounding states and the Jesuit priests based out of St. Francis Mission. St. Ignatius Catholic Church, described as “up on the hill west of town,” in the Sacred Heart Centennial Booklet, was where many Catholics in White River attended Mass until 1920.

“For twenty years the Lakota people celebrated their faith before Sacred Heart even existed, and for decades after the small town of White River would boast two Catholic Churches,” Father Jacob Boddicker, SJ, said during his homily at the centennial celebration, November 3. “The Diocese of Lead canonically established the parish of Sacred Heart with the purpose of serving the Catholic ranchfolk in the area, as well as the growing Catholic community within the limits of White River itself.”

Construction on the new church began in 1919 with several Catholic men from the parish digging the basement. Catholic Extension provided a $1,792 grant.

The first baptism in the church was held November 23, 1919 even through the building was not complete. The first marriage was April 16, 1920, and the first Communion class received the sacrament April 23, 1922. Six priests served the parish and its missions at Wood, Cody and Berkeley at different times until 1938 when the church was attended by the priests of St. Francis Mission.

In 1949, the building was completely renovated. Eight stained glass windows were installed and a new group of statues purchased through the donations of parishioners.

In 1950, a shrine in honor of the Sacred Heart was built on the church property using petrified wood and rock from the Black Hills.

In 1957, a new crucifix was added and a new altar and organ were installed. The parish underwent another renovation in 1976.

The parish hall was orignally a tent used by the Altar Society who served meals for the bazaars, celebrations, and the annual Frontier Days beginning in the 1920s. These meals were served from the tent until 1936 when the group was able to purchase an old building that would serve as a parish hall for 33 years. Water was drawn from a cistern with a pail and rope for all the cooking and cleaning needs and thrown out the back door once it was used. The ladies also cooked on an old wood range with a reservoir of the side for heating water. Later a kerosene stove was purchased and a hand pump installed. In 1969 the building was razed by members of the parish to make way for a new hall that was built on the original site, and still servers as the hall today.

In December of 1966, the new priest decided, with consultation, to close Sacred Heart and have everyone worship at St. Ignatius. After further discussion with the bishop, it was decided it would be unwise to close the parish.

In 2005, the “Faith Formation Initiative’ committee was established to discuss the witness of the faith in White River. Due to declining attendance at St. Ignatius Church, an alternating Mass schedule between the two parishes was developed.

The two parishes, along with Our Lady Of Good Counsel, Wood, became known as the “White River Catholic Faith Community.” The Faith Initiative Committee was reactivated to serve both parishes, to replace the dissolved parish councils. Both parishes retained a finance council.  The last scheduled Mass at  St. Ignatius Parish was in May 2011.

“Praise God that Jesus, in his great mercy, came here a century ago … and praise God for our Lakota brothers and sisters,” Father Boddicker said,  “who cleared the path for Jesus in this land, and all the others: they planted the seeds of faith in the ground beneath our feet, in the hearts and souls of their children, grandchildren, and beyond that have lasted a hundred years. The next hundred years, brothers and sisters, are in your hands, and in your hearts; let us carefully and joyfully pass on this inheritance for generations to come!” 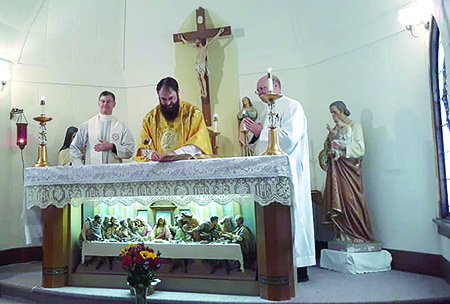 Church Music — After the parish was built, a small organ was purchased in the 1920s and a small four person choir was assembled. As time went on, a Boy’s Choir consisting of 16 boys under the age of 12 was started, in addition to a Young People’s Choir. A new organ was installed in 1957. In 1981, a folk hymnal was purchased for a folk choir that predominately featured guitar accompaniment. (Above) The Boy’s Choir from 1938. 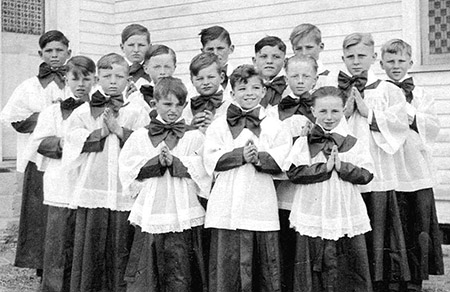