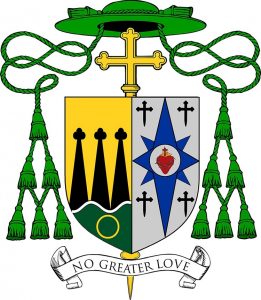 The recent revelations regarding the allegations of sexual abuse and misconduct by Archbishop Theodore McCarrick and allegations in the published report from the Pennsylvania Grand Jury report concerning child sexual abuse by clergy in many of the dioceses in that state and the lack of appropriate response by some bishops over many decades is not only quite disturbing, but sickening.

These horrific actions bring deep sadness and shame to me and many of my brother bishops. I would have to believe that those who have experienced the trauma of sexual abuse by clergy and the coverup feel betrayed once again by the Church. They have every right to feel this way. My sincere apologies and prayers go out to each of them. I share the disgust and anger they and Catholic faithful experience from this betrayal.

As many other bishops have suggested, these tragic and abhorrent actions must be dealt with decisively, honestly and with total transparency. The proposal for a national, independent panel of expert lay faithful, commissioned and duly approved by the Holy See and completely separated from any source of power in the Church that could exert influence on the bishops would be an important step forward in making lasting reforms in the Church regarding the investigation of bishops. This must be followed by the implementation of concrete changes to ensure that this never happens again and those involved be held accountable, no matter what their position in the Church might be.

To prevent misconduct and abuse, the Diocese has a comprehensive policy on sexual misconduct as well as codes of conduct for priests, deacons, lay employees, volunteers and youth activity participants. Background checks and safe environment training must be completed before any clergy, seminarians, diocesan employees or volunteers may work with children or vulnerable adults. All children involved in the Catholic schools or parish religious formation programs are taught to recognize, resist and report abuse of any kind.

The Diocese takes seriously any allegation involving misconduct toward a minor or vulnerable adult and ensures that it is thoroughly investigated. The independent Diocesan Review Board, made up of one priest and several lay people, carefully reviews any allegation and makes recommendations to the bishop about its credibility. Allegations are also referred to civil authorities. The Diocese is audited each year by an independent company and has been found to be in compliance since the audits began in 2007.

I will ensure that the diocese remains vigilant and transparent in fulfilling its policies and procedures regarding reported sexual misconduct. Anyone who has been a victim of sexual misconduct by a bishop, priest, deacon or lay personnel is invited to contact the Victim Assistance Coordinator by calling 605-209-3418.

Members of the Body of Christ are suffering. The Church is suffering. I will engage in fasting and prayer for reparation for the sins and failings of those who abused their power and authority which led to the injury of others, especially our children. I will also continue to pray for the healing of those victims who have been harmed by such actions.

I invite all Catholics to turn to prayer and sacrifice, asking the Lord Jesus, the Divine Physician, who gave his life for his Church, to lead her to true healing, conversion and holiness.