Agnes Gonxha Bojaxhiu was born August 16, 1910, into a Roman Catholic Albanian family in the city of Skopje, now the capital of Macedonia. As a child she was captivated by the stories of missionaries, especially those serving in India. At the age of eighteen Gonxha joined the Sisters of Loreto, an Irish missionary order that served in West Bengal, India, taking the name Mary Teresa after St. Thérese of Lisieux. Sister Teresa taught at a girls school in Calcutta, eventually becoming headmistress in 1944.

Her life took a dramatic turn on September 10, 1946, when, while on the train to Darjeeling for her annual retreat, she received a vision of Jesus asking her to “come be my light” to the poor, to seek them out and serve them in a radical way. Teresa referred to this experience as receiving a “call within a call.” After she was granted permission to leave the Sisters of Loreto and found a new order, she began her ministry by going into Calcutta’s largest Christian slum and teaching children, writing in the dirt with a stick. She was soon joined by several of her former students and the Missionaries of Charity began to grow. Sister Teresa was now Mother Teresa.

Mother Teresa began her ministry in the midst of a troubled time in India’s history. After India gained independence in 1947, there was intense fighting between Hindus and Muslims sending a flood of refugees into Calcutta. While walking through the streets one day she encountered a severely malnourished man, lying in the gutter, dying alone. Moved by this encounter, Mother Teresa created a Home for the Dying where the sisters welcomed and cared for those who would otherwise die alone in the streets. Her ministry continued to expand in Calcutta as she opened homes for orphaned children and later for those suffering from leprosy. In 1965, the Missionaries of Charity opened a mission house in Venezuela, the first outside of India. 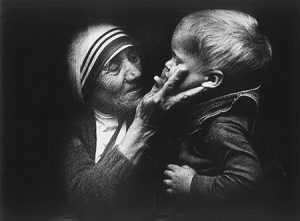 Within her lifetime, Mother Teresa’s sisters would increase to over 4,000 members serving in 123 countries. Her selfless service to the poor began to attract international attention, earning her several prestigious prizes culminating in her being awarded the Nobel Peace Prize in 1979.

While she joked about feeling uncomfortable with her publicity, (once telling journalists that a soul must be released from Purgatory every time her picture is taken), she used her international platform to speak out against abortion, contraception and the spiritual poverty she found in the wealthy nations of the West. She also reminded people that they did not need to travel to distant lands to serve the poor. Speaking at the National Prayer Breakfast in Washington, D.C., in 1994, Mother Teresa said: “I want you to find the poor here, right in your own home first. Love begins at home, and it is not how much we do, but how much love we put into what we do.”

Mother Teresa’s work was not that of a philanthropist, rather she considered herself a contemplative, contemplating the face of Jesus in the “distressing disguise” of the poorest of the poor. She would often repeat the words, “you did it to me,” enumerating them on her fingers, recalling the words of Christ from the end of Matthew’s Gospel, convinced that in touching the suffering bodies of the poor she was touching the body of Christ. Her zeal for serving the poor found its source in her experience on the train on September 10, known as Inspiration Day by the Missionaries of Charity. That day God allowed her to experience his thirst for her personally. Through Jesus’ revelation she came to understand that when he said, “I thirst” upon the cross, He spoke not only of physical thirst but of his thirst for souls — our love. In a letter to her sisters she explains, “‘I thirst’ is something much deeper than just Jesus saying ‘I love you.’” At her beatification, Pope John Paul II underlined the power of “I thirst” for Mother Teresa: “Satiating Jesus’ thirst for love and for souls in union with Mary, the Mother of Jesus, had become the sole aim of Mother Teresa’s existence and the inner force that drew her out of herself and made her ‘run in haste’ across the globe to labor for the salvation and the sanctification of the poorest of the poor.”

After the intense light and love she experienced on the train, Mother Teresa soon found herself shrouded in an inner darkness, a darkness that would last fifty years. With the help of trusted spiritual directors she came to understand and embrace this interior darkness as a participation in the darkness of Christ’s passion as well as sharing in the darkness of the poor. Far from undermining her faith, Mother Teresa’s experience of darkness illuminates the strength and depth of her faith that trusted in God’s love for her in the absence of any sense of his presence. While she lived in the midst of darkness, she radiated Christ’s light to the poor and to the world.

Prayer to St. Teresa of Kolkata

St. Teresa of Kolkata, you allowed the thirsting love of Jesus on the cross to become a living flame within you, and so became the light of his love to all.

Teach me to allow Jesus to penetrate and possess my whole being so completely that my life, too, may radiate his light and love to others.