Patrick eventually made it back home, but had a vision which took him on a different path: “I saw a man coming, as it were from Ireland. His name was Victoricus, and he carried many letters, and he gave me one of them. I read the heading: ‘The Voice of the Irish.’ As I began the letter, I imagined in that moment that I heard the voice of those very people who were near the wood of Foclut, which is beside the western sea, and they cried out, as with one voice: ‘We appeal to you, holy servant boy, to come and walk among us.’” This prompted Patrick to study for the priesthood. He went to a monastery in France, where he remained for a few years and was ordained a priest and then, a bishop. The church sent him back to Ireland in the year 433 to proclaim the Gospel. 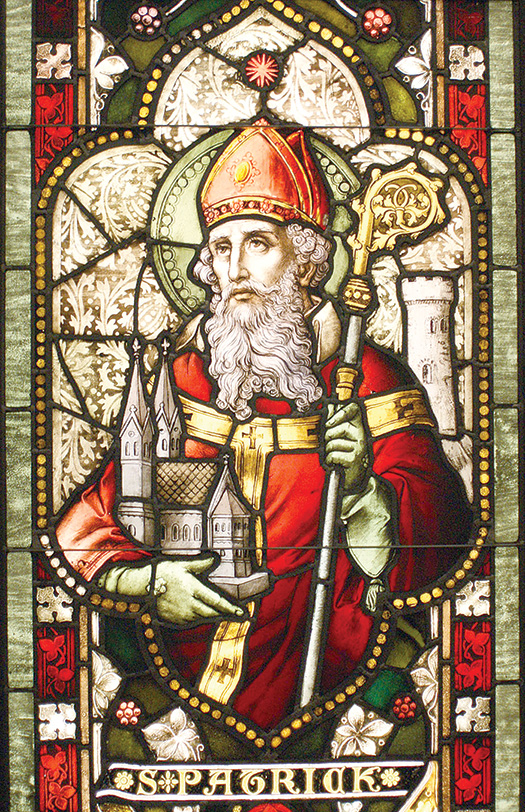 once again, Bishop Patrick met a druid king, Laeghaire, who tried to kill him, but God intervened, and Patrick was victorious. This victory resulted in Patrick’s being allowed to preach the Gospel among the people. Thousands were converted through Patrick’s preaching and miracles, churches were built, and Christianity began to spread. The Druids who served as prophets, philosophers, scientists, judges, and teachers, began to be threatened by this, realizing that their own religion was disappearing in favor of Christianity. They captured and imprisoned Patrick many times, but every time he was able to escape. St. Patrick is credited with converting all of Ireland to Christianity. A humble man full of love for God and complete trust in him, Patrick revealed the tremendous mercy of God in returning to the land of his enslavement to bring the good news to those who continued to persecute him throughout the years. He died in Ireland in 461, having given his whole life to God and the people of Ireland.

(Saint of the Month column is courtesy the Year of Mercy Committee. “Saint Patrick window” by Sicarr — Flickr. Licensed under CC BY 2.0 via Commons

St. Patrick’s life is a model of mercy for us. At age 16, Patrick was captured and taken to Ireland as a slave. For six years he remained in captivity tending swine and cattle. He spent that time in prayer and fasting, and he suffered much, but he said of this time that his spirit became fervent, as he prayed through the night and often woke to prayer in cold, snow, and rain. Then, one night he heard a voice calling him to escape and return to his native land, Roman Britiain, so he ran away and found a ship departing the isle. At first, the captain refused him passage, but Patrick prayed to God, and the crew took him with them. After three days at sea, they reached land, but food was scare and the crew was hungry. They asked him to pray to his God for food. Patrick told them all to turn to God who would provide for them. That day, they came across a herd of swine and had food in abundance.