Karol Wojtyá was born May 18, 1920, into a devout Catholic family in Wadowice, Poland. His early life was marked by suffering and loss. When he was eight years old his mother died, and three years later his older brother. With the instruction and example of his father, Karol drew close to Our Lady and found solace in prayer. His father died in 1941 and at the age of twenty Karol was left alone in the world. Karol excelled academically and attended the prestigious Jagellonian University in Kraków; however, his studies were interrupted by war and the Nazi occupation. He went to work as a manual laborer in a quarry where he was known to sing and lift the spirits of those around him. Wojtyá entered the seminary in secret in 1942. 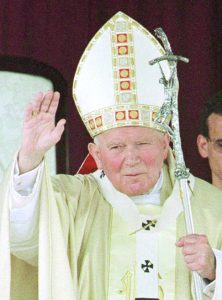 Pope John Paul II blesses the crowd of about 40,000 gathered for Mass in the central city of Santa Clara, Cuba, Jan. 22, 1998. He presided over a two-hour liturgy during which he urged Cubans to turn to Christ to bolster family life. (CNS photo/Reuters)

After the war ended, he resumed his studies and was ordained a priest in 1946. As a priest he spent much of his time ministering to young adults, often going on camping trips with them, and later taught philosophy at a Catholic university while earning his doctorate. In 1958, he was ordained auxiliary bishop of Kraków, then installed as archbishop of Kraków in 1964. While bishop, he attended all four sessions of Vatican II and worked to undermine the tyranny of Soviet communism. Wojtyá was named a cardinal in 1967 and then elected pope on October 16, 1978.

God’s mercy was a central theme of John Paul’s pontificate. In his famous homily at his inauguration Mass, John Paul exhorted the world: “Do not be afraid. Open wide the doors for Christ.” Having witnessed the atrocities wrought by war and hate in his own country he knew well the depth of sin and evil; yet, he knew that God’s mercy was deeper still. Later, he wrote the encyclical Dives in Misericordia in which he emphasizes Jesus’ message of mercy to those who suffer: the poor, the outcast and the sinner, holding up the parable of the prodigal son as a “simple but profound” illustration of the “reality of conversion.”

John Paul not only spoke and wrote about mercy but he lived it. One of the most notable examples is when he visited Mehmet Ali Agca, his would-be assassin, in prison and forgave him. Another powerful example is the story of a priest who while visiting Rome stumbled upon a man begging outside a church who looked strangely familiar. Upon asking the man, the priest learned that they had in fact studied and been ordained together. The man related that after several crises he had renounced his priesthood, been stripped of his priestly faculties and was reduced to a homeless beggar. Later that day, in a private audience with the pope, the priest quickly blurted out the story of his encounter with the beggar. The priest received word from the Vatican that he was to dine with the Holy Father and was instructed to bring the homeless man. Though reluctant, the homeless man accompanied the priest. After dinner John Paul asked to be alone with the homeless man. After fifteen minutes, the man emerged from the room in tears. The priest eagerly asked the homeless man what happened. He recounted that John Paul had asked him to hear his confession. When he protested that he was a beggar and no longer a priest, John Paul replied saying: “once a priest, always a priest!” and “I too come before the Lord as a beggar.” After asking if he desired it, John Paul reinstated his priestly faculties and the beggar priest heard the confession of the pope. John Paul then sent him forth, instructing him to return to the parish where he had sat outside begging, that he was to be an associate pastor there and minister to his fellow beggars. With the love of the merciful Father, he welcomed his lost sheep back into the flock then sent him out to go and do likewise.

Near the end of his pontificate, John Paul canonized St. Maria Faustina Kowalska, the Polish nun to whom Jesus revealed the Divine Mercy image and chaplet, and he established Divine Mercy Sunday as a feast for the whole church. He brought this message of Divine Mercy to the world as he travelled to 129 countries while pope. After suffering from Parkinson’s disease for several years, John Paul died April 2, 2005 on the eve of Divine Mercy Sunday. He was canonized by Pope Francis on April 27, 2014. In his homily at John Paul’s funeral Mass, then-Cardinal Ratzinger said: “Our Pope — and we all know this — never wanted to make his own life secure, to keep it for himself; he wanted to give of himself unreservedly, to the very last moment, for Christ and thus also for us.”

O Holy Trinity, we thank you for having given to the Church Pope John Paul II, and for having made him shine with your fatherly tenderness, the glory of the Cross of Christ and the splendor of the Spirit of love.

He, trusting completely in your infinite mercy and in the maternal intercession of Mary, has shown himself in the likeness of Jesus the Good Shepherd and has pointed out to us holiness as the path to reach eternal communion with you.

Grant us, through his intercession, according to your will, the grace that we implore, in the hope that he will soon be numbered among your saints. Amen.