Martin was born the illegitimate son of a Spanish knight, John de Porres, and a freed slave woman, Anna, in Lima, Peru, in 1579. He inherited his mother’s dark complexion and features, and so endured much hardship, persecution, and ridicule for his biracial heritage throughout his life. His own father never married his mother and refused to even acknowledge his son until Martin was about 8 years old. After a sister was born, his father abandoned their family and left them to a life of poverty.

Martin did not receive much schooling, and at age 12 he was apprenticed to a barber-surgeon where he learned both trades — cutting hair, caring for the si 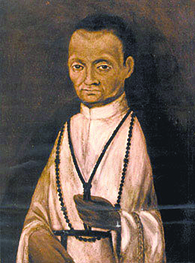 ck and injured, treating wounds and ailments, drawing blood, distributing medication, etc. After spending three years in this apprenticeship, Martin longed to join the Dominican religious community in Lima. As a teenager he asked to serve their community as a lay helper, where he worked tirelessly at any menial task. At age 15 he applied for admission into the community and received the Dominican habit. He served in his old trades as barber and surgeon — caring for those in the infirmary, in addition to cleaning, washing clothes, and serving meals —doing them with great love, care, and humility, prompting a brother to note that “he clung to God in his soul,” and so “all these things were effects of divine grace.”

Eventually Brother Martin made full religious profession in the community. He was known to spend his days caring for the sick and the poor and his nights in prayer and penance. He treated not only the brothers, but all people who came to him, regardless of their race, wealth, or status —wealthy nobles and poor slaves all knew they could come to Brother Martin for medical care and assistance. He helped to found an orphanage and a hospital, and he raised money for poor girls in need of a dowry. It is said that he received extraordinary gifts, including bilocation, flight, miraculous knowledge, and miraculous healing. Many of the brothers asked him to be their spiritual director, and although an admired leader in the community, he always referred to himself as a poor slave.

Brother Martin set an example of great love, humility, compassion, and mercy, giving alms to the poor and providing for them in their need, caring for orphans and slaves, working hard at menial tasks, teaching, tending to the sick and injured, and providing for spiritual direction for the brothers. He was friends with St. Juan Macias, a fellow Dominican, and St. Rose of Lima, who often aided him in his work. Brother Martin died in 1639; prelates and noblemen carried his body to his tomb. A saint of mercy and forgiveness and charity, he is the patron saint of interracial justice. At his canonization in 1962, St. John XXIII said of him, “He excused the faults of others. He forgave the bitterest injuries, convinced that he deserved much severer punishments on account of his own sins. He tried with all his might to redeem the guilty; lovingly he comforted the sick; he provided food, clothing and medicine for the poor; he helped, as best he could, farm laborers and Negroes, as well as mulattoes, who were looked upon at that time as akin to slaves. Thus, he deserved to be called by the name the people gave him, ‘Martin of Charity.’”

To you, Saint Martin de Porres, we prayerfully lift up our hearts filled with serene confidence and devotion. Mindful of your unbounded and helpful charity to all levels of society and also of your meekness and humility of heart, we offer our petitions to you. Pour out upon our families the precious gifts of your solicitous and generous intercession; show to the people of every race and every color the paths of unity and of justice; implore from our Father in heaven the coming of his kingdom, so that through mutual benevolence in God, men may increase the fruits of grace and merit the rewards of eternal life. Amen.