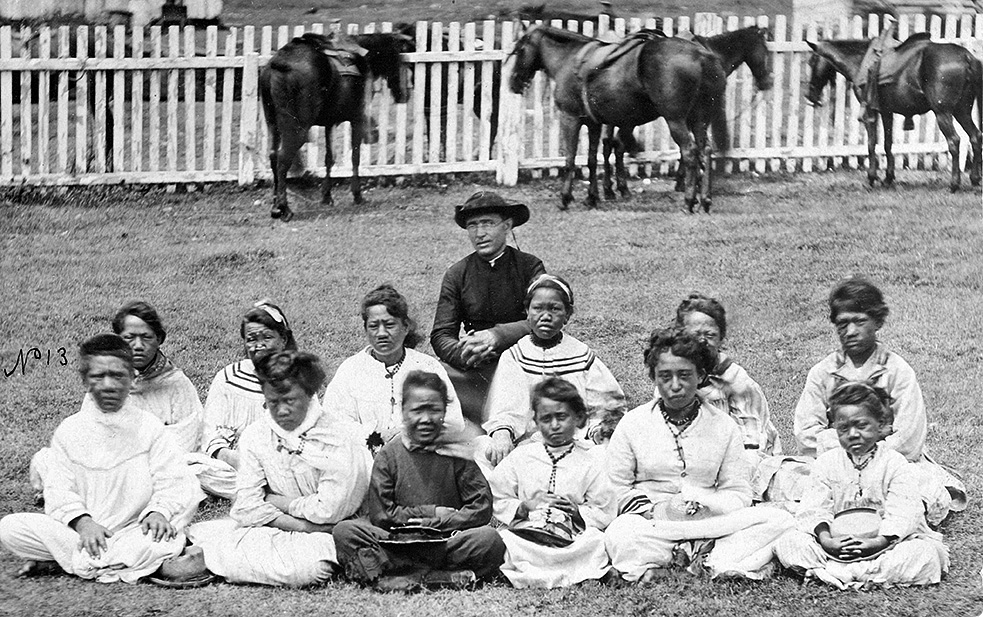 (Father Damien with residents of the Molokai settlement.)

Joseph de Veuster grew up on a farm in Belgium in the 1800s. He responded to God’s call to enter the Congregation of the Sacred Hearts of Jesus and Mary, taking the name of a fourth-century physician and martyr, St. Damien, and soon volunteered to go to the Hawaiian Islands in place of a brother who had fallen ill. In Honolulu, in 1864, Damien was ordained a priest.

For several years leprosy had been spreading in Hawaii, and in 1866, the government established a leper colony on the island of Molokai in an attempt to stop the spread of the disease.

By 1873, almost half of the nearly 800 lepers who were sent there had died. Efforts were made to improve conditions but were unsuccessful. Molokai was a lawless place, filled with some who in despair, participated in sexual immorality, drunkenness, brawling, and robberies. When the lepers died, their bodies were thrown into shallow graves where wild animals could reach them. In 1873, Fr. Damien requested to go to Molokai, as many of his people at his mission in Kohala, Hawaii, were falling ill with leprosy: “Many of our Christians here at Kohala also had to go to Molokai. I can only attribute to God an undeniable feeling that soon I shall join them … Eight years of service among Christians you love and love you have tied us by powerful bonds.” Fr. Damien was not the only missionary who offered to go to Molokai despite the danger of contracting the contagious disease. He was sent as a part of a team of four priests who would spend three months at a time serving the lepers, but soon he requested to remain for an extend period of time. His request was granted by his superiors who said, “You may stay as long as your devotion dictates. …”

Fr. Damien, a skilled carpenter, added to the chapel, dedicated to St. Philomena, building a rectory and cottages. He admonished those who were living an amoral lifestyle and brought many back to the faith. He filled the chapel and had to expand it. He formed a choir with organists and provided a poor box so that the parishioners too could give to the poor.

He served the people with great love and care; he washed their bodies, cleaned and bandaged their wounds, and helped tidy their homes. He built a proper cemetery and organized the Christian Burial Association to provide a decent burial for each of those who died. He anointed the sick, heard confessions, brought communion to those who could not attend Mass, and taught them to build roads, to farm, raise animals, play athletic games and musical instruments, and to sing. He taught them all these things and shared his life with them giving them dignity.

Fr. Damien brought attention to the plight of the lepers and people around the world began to give to them. Eventually Fr. Damien contracted leprosy, a plight that he had dreaded, and truly joined them often speaking of “we lepers.” He suffered from the disease and was criticized by the government and his own congregation. Once he had to confess his sins by shouting them from a boat to a bishop on another ship because the ship’s captain would not allow Fr. Damien to board or the bishop to disembark on Molokai.

Even with the disease, Fr. Damien worked harder than ever for the sick. He solicited help from donors and the Hawaiian government, laity and priests who came to help him on the island, and by bringing Mother Marianne Cope and her sisters to a girls orphanage on Molokai. Leprosy took Fr. Damien’s eyesight and spread to his throat, lungs, stomach, intestines, and eventually he died from the disease at the age of 49, having lived a life of mercy.

At the Mass for canonization, Pope Benedict said, “Not without fear and repugnance, he chose to go to the Island of Molokai to serve the lepers who lived there, abandoned by all. Thus he was exposed to the disease from which they suffered. He felt at home with them. The servant of the word consequently became a suffering servant, a leper with the lepers, for the last four years of his life. In order to follow Christ, Fr. Damien not only left his homeland but also risked his health. … Let us remember before this noble figure that it is charity which makes unity, brings it forth and makes it desirable. Following in St Paul’s footsteps, St. Damien prompts us to choose the good warfare (cf. 1 Tim 1: 18), not the kind that brings division but the kind that gathers people together. He invites us to open our eyes to the forms of leprosy that disfigure the humanity of our brethren and still today call for the charity of our presence as servants, beyond that of our generosity.”

Father of mercy, in St. Damien you have given a shining witness of love for the poorest and most abandoned. Grant that, by his intercession, as faithful witness of the heart of your Son Jesus, we too may be servants of the most needy and rejected. Teach us to live our lives with joy like yours and to celebrate and contemplate the Eucharist so we might be good disciples of Jesus and Mary. We ask this through our Lord Jesus Christ, your Son, who lives and reigns with you and the Holy Spirit, one God, forever and ever. Amen.