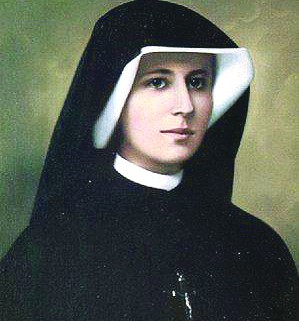 “Be always merciful as I am merciful. Love everyone out of love for me, even your greatest enemies, so that My mercy may be fully reflected in your heart.” — Jesus to St. Faustina

St. Faustina Kowalska is often called the Apostle of Mercy. The Lord Jesus chose Sr. Mary Faustina as the secretary of his mercy, so that she could tell the world about his great desire to pour his mercy upon the world. However, if you found yourself walking the streets of Krakow, Plock or Vilnius, Poland, where she lived and served as a sister and encountered her, you probably would have never guessed she had been given this great task by God.

Sr. Faustina was born the third of ten children into a poor peasant family in Glogowiec, Poland. She received little education, only attending school for three years. By the age of 16 she had left home and was working as a housekeeper to help support herself and her family. From a young age, she had a desire to enter religious life, and at the age of 20 she was able to enter The Congregation of the Sisters of Our Lady of Mercy. She worked as a cook, gardener and porter, performing her tasks faithfully and was obedient to the rule of religious life. She seemed cheerful and full of kindness to those she worked with, but her life also seemed ordinary and insignificant. Hidden within herself was an extraordinary faith and union with God.

In the 1930’s, she received a message from the Lord inviting her to become the apostle of Divine Mercy, a model of how to be merciful to others and an instrument for reemphasizing God’s plan of mercy for the world. She lived her whole life, in imitation of Christ, as a sacrifice for others, willingly offering her personal sufferings in union with Christ to atone for the sins of others and sought to bring joy and mercy to all she encountered. She continued to receive revelations and visions and many extraordinary gifts which she recorded in her diary, but remained hidden to all but her Spiritual Director.

“These gifts are merely ornaments of the soul, but constitute neither its essence nor its perfection. My sanctity and perfection consist in the close union of my will with the will of God” (Diary 1107).

Saint Faustina died on October 5, 1938, at the age of 33, consumed by tuberculosis. After her death, her closest associates were amazed as they began to discover what great sufferings and deep mystical experiences had been given to this simple, uneducated sister of theirs. Pope St. John Paul II beatified Sr. Faustina in 1993 and declared her a saint in the year 2000. Jesus’ great message of mercy is now being spread to the whole world through her diary and the image of Divine Mercy which she was given. Both her writings and the example of her life give us a blueprint for how we can fulfill Jesus’ invitation to “be merciful just as your Father is merciful” (Luke 6:36).

O Jesus, You inspired Saint Faustina with profound veneration for your boundless Mercy, deign, if it be your holy will, to grant me, through her intercession, the grace for which I fervently pray … My sins render me unworthy of your Mercy, but be mindful of Saint Faustina’s spirit of sacrifice and self-denial, and reward her virtue by granting the petition, with childlike confidence, I present to you through her intercession.