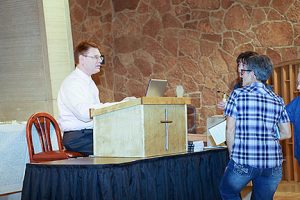 Dr. Peter Kleponis visits with attendees after his talk on pornography addiction and ways to seek help for someone with an addiction. Click the photo to see the full video his public presentation at Terra Sancta, Rapid City.

He went back to school to gain the skills needed to help in recovery.

He provided the Rapid City audience with a host of statistics, but then he said they are probably a gross underestimate because many people do not want to admit to the problem.

“Why are we being bombarded (with pornography) from every direction? It’s simple, money,” he said. He explained the billions of dollars made from exploiting women and children.

He described the series of chemicals produced by the brain that cause addiction to be desirable.

“As with any addiction as tolerance grows you need more of the substance to get the same effect, dependency sets in, (and if a person cuts back) withdrawal symptoms occur,” he said.

He said treating the addiction is only part of the healing. The other part is addressing the underlying problems in the person’s life: family of origin, abuse, loneliness, trauma, insecurity and escapism. If the person is married you have to look at what is happening in that relationship.

Kleponis recommended limiting screen time. “Every night at 9 o’clock collect all the gadgets, turn them off and lock them away. Why? Kids need to realize they don’t need to be surgically attached to their technology 24- hours a day. They need time for their brains to decompress if they have had their face in a screen all day long, their brain is over stimulated, it needs time to relax and calm down,” he said.

Even adults need down time. He recommended turning off all technology before bedtime. “If you like to read, use old fashioned paper,” he said.

He has found support groups to be helpful in recovery. “You need support and accountability. You cannot do this alone, you have to surround yourself with other people who understand the struggle, and will support you and keep you accountable. And you do the same for them too,” he said.

Click here for the full video of Dr. Kleponis presentation