When Giovanni (John) Bosco was nine years old he had a dream in which an angry mob of children were fighting and swearing all around him. He tried to convince them to stop — at first with his words and then later with his fists — but a woman appeared to him who said, “Softly, softly … if you wish to win them. Take your shepherd’s staff and lead them to pasture.” The children began to turn into wild beasts and then into gentle lambs. From this dream, John knew that his call was to help and to lead other boys.

John’s father died when he was two years old, so his mother raised him and his two brothers on her own. They were poor, but John had a great desire to be a priest and he was able to enter the seminary with money for all his expenses from charity. He worked hard and eagerly, so people readily supported him. While at seminary and as a deacon, he worked with homeless or neglected boys in his spare time. His superiors supported his work, and so he began to gather the boys regularly on Sundays to learn about the faith and recreate.

After his ordination, Fr. Bosco was appointed as an assistant chaplain of a home for girls founded by Marchesa Barolo, a wealthy and generous woman. One day, while vesting for Mass, he heard the sacristan yelling and driving out a boy who had sneaked in to get warm. He called the boy back and asked him his name. “Bartolomeo Garelli,” he answered. Bosco asked if he could serve Mass, and the boy said no. He asked about his parents, but the boy had none. Bosco asked if he could sing; Bartolomeo laughed and the two struck up a friendship. He invited Bartolomeo to stay f 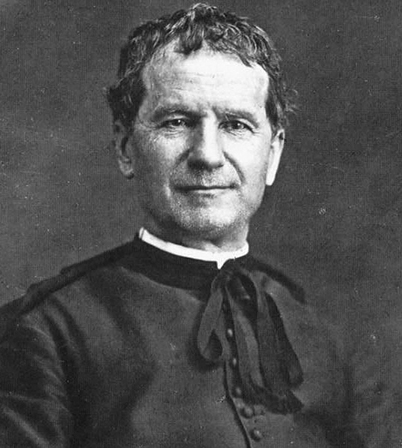 or Mass and to bring his friends the next Sunday, and Fr. Bosco’s work now began to grow.

He called these Sunday gatherings “the festive Oratory.” Eventually, though, the Marchesa asked the group to leave because the boys were noisy, wild, and disruptive. For the next year the group moved from location to location; Bosco had difficulty finding a permanent place because no one would keep them for very long. When finally they found a meeting place, the Marchesa told Fr. Bosco he could no longer do both works — he must either give up the Oratory or give up his post at the girls home. Fr. Bosco resigned from his post and began working full time with the boys in the Oratory.

Pneumonia nearly cost Bosco his life, but he recovered and worked as zealously as ever for the boys, starting a night school, opening more youth centers, and housing some destitute boys. He built a church under the patronage of St. Francis de Sales and developed a boarding school, at which, by 1856 there were one-hundred-and-fifty boys in residence and ten young priest instructors, and the oratories included more than five-hundred children.

St. John Bosco was a man ahead of his time in regard to catechetical methodology. He knew that intellectual knowledge was not enough — he wanted to form disciples so their formation included music, play, study, prayer, and work. He said, “Knowledge gives more power in the exercise of good or evil, but alone it is an indifferent weapon lacking guidance.” He did all this without the use of formal punishment; he used reason, religion, and kindness, and was famous for saying, “Get them to love you and they’ll follow you anywhere.” He knew that a loving, caring, attentive adult was necessary for the healthy formation of every child. The boys knew that Fr. Bosco loved them, and so they would follow him wherever he led.

Fr. Bosco founded a religious community together with his brothers in this work to carry on their apostolate and works of charity. They were called the Salesians, named again, for his favorite saint. Later, he founded an order of women in order to spread this work to poor young girls as well — the Daughters of St. Mary Auxiliatrix the Helper. He organized laity who served alongside them in a third order, called the Salesian Cooperators. St. John Bosco died in 1888 in Turin, having given his whole life in mercy toward God’s children.

O glorious Saint John Bosco, who in order to lead young people to the feet of the divine master and to mould them in the light of faith and Christian morality, didst heroically sacrifice thyself to the very end of thy life and didst set up a proper religious institute destined to endure and to bring to the farthest boundaries of the earth thy glorious work. Obtain also for us from Our Lord a holy love for young people who are exposed to so many seductions in order that we may generously spend ourselves in supporting them against the snares of the devil, in keeping them safe from the dangers of the world, and in guiding them, pure and holy, in the path that leads to God. Amen.