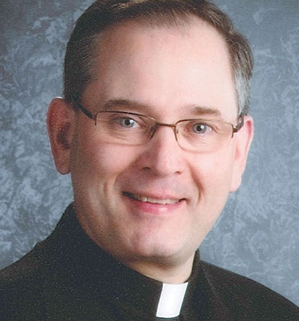 WASHINGTON — Pope Francis has named Father Peter M. Muhich, a priest of the Diocese of Duluth as the Bishop of Rapid City.

The appointment was publicized in Washington, D.C. on May 12, by Archbishop Christophe Pierre, apostolic nuncio to the United States. The Diocese of Rapid City has been a vacant see since July 2019.

“I am so grateful to the Holy Father for having confidence in me,” Bishop-elect Muhich said.

Cardinal Blase Cupich of Chicago called before a Zoom media conference held for Rapid City journalists. “He was very happy for you and for me,” he said

Father Muhich (pronounced Mew-ich) was born on May 13, 1961, in Eveleth, Minnesota, to Louis and Sally Muhich. The second of seven children he grew up in a devout Catholic family on the Iron Range of Northern Minnesota where mining is the main industry.

He phoned his parents early May 12. “My parents were very, very excited. They’re in their mid-eighties and of course they understand this means moving away. That’s difficult, but they are remarkable people of faith,” he said.

He was ordained to the priesthood on September 29, 1989, for the Diocese of Duluth. Father Muhich attended Eveleth High School and University of St. Thomas in Saint Paul, Minn. He studied theology at the American College of Louvain in Belgium.

He has served the Duluth Diocese in many capacities. He was an associate pastor and pastor in parishes across the diocese, most recently as rector of the Cathedral of Our Lady of the Rosary for the last 11 years as well as Pastor of St. Mary Star of the Sea parish in Duluth for the last six years.

The bishop-elect has served on the Presbyteral Council, the Diocesan Personnel Board, and as a Dean and Consultor. Over his 30 years of priestly ministry he has also worked with the Permanent Diaconate Formation Program and the Diocesan Finance Office. In 2012 he led a Strategic Planning Process for the diocese.

He is a friend of  Bishop Donald DeGrood who was ordained in February for the Diocese of Sioux Falls. Bishop DeGrood is also from Minnesota.

“I look forward to this adventure in faith together,” he said about coming to South Dakota. Although he has never been here before, he has been studying the area and is hoping the winters will be milder than in Duluth.

The corona virus is delaying many events and the Diocesan Ordination Planning Committee will have to wait for an exact date to firm up plans.

“In talking to the papal nuncio on the phone, he said there are several priests who have been selected as bishops in other places in our country that are still awaiting ordination to become bishops as well. We are all going to wait until the nuncio can travel safely and we can gather safely,” said Bishop-elect Muhich.

(Taken from USCCB and WRC reports)