News
You are here: Home1 / News2 / Uncategorized3 / Please keep the canonization cause in your prayers

Last October 21st was an important day in the history of the Diocese of Rapid City. On this day, during the celebration of the Mass at Holy Rosary Church in Pine Ridge, a decree was read formally opening the cause for beatification and canonization of Nicholas Black Elk, Sr. I would like to update you on what has happened since that momentous day.

At the November 2017 USCCB meeting, as required by canonical procedures, I made a presentation to the American bishops seeking their prayerful support to move forward the process for beatification and canonization of Nicholas Black Elk. Following that procedure, their unanimous approval was made public and since then I have been amazed and inspired by the interest in this cause from all across the country and throughout Europe.

Since the opening of the cause, I have received a number of letters and phone calls from people in various parts of the country sharing with me the impact or influence that Black Elk has had in their lives as they have studied his life or through intercessory prayer. In addition, numerous film producers have contacted me expressing interest in creating a film or documentary on his life.

In recent months, we have secured a postulator in Rome, Fr. Luis Escalante, who is experienced in working with the process and procedures and the Congregation for the Causes of Saints, bringing an expertise that is not available locally. Bill White of Christ the King Parish in Porcupine will assume the role of Vice Postulator. Part of the process is to formally appoint the Officials of the Inquiry. Fr. Joseph Daoust, SJ, has been appointed Episcopal Delegate, Fr. Dan Juelfs as Promoter of Justice, and Teresa Spiess as Notary.

To assist in searching out and gathering all the published writings of the Servant of God Nicholas Black Elk, those not yet published, as well as all historical documents, a Historical Commission is appointed. Members of this commission are Mark Thiel, Archivist at Marquette University where many records about Nicholas Black Elk are kept; Fr. Michael Steltenkamp, SJ, author of two books about Black Elk — “Black Elk: Holy Man of the Oglala,” and “Nicholas Black Elk: Medicine Man, Missionary, Mystic;” and Ken Stewart, Archives Research Administrator for the South Dakota State Archives/South Dakota State Historical Society.

An important aspect of the cause is to verify the heroic virtues and the reputation of holiness and intercessory power of the person being considered for beatification and canonization. This takes place through the testimony of witnesses. These include eyewitnesses, that is, those who have had direct and immediate knowledge of the Servant of God, i.e., blood relatives and other relations as well as others who have received information about Nicholas Black Elk from those who have had direct and immediate knowledge. The witnesses are bound by an oath to tell the truth and to keep secret their role in this process.

There are other particulars that are a part of the process, but because of limited space here I have outlined the basic process. In the coming months the Officials of the Inquiry will be completing their work, bringing together all of the required documentation — Acta (Acts) — necessary to move this cause forward. Upon completion, the Acta are then sent to the Congregation for the Causes of the Saints. Then the diocesan phase of the process is completed.

An important aspect of this whole process on a local level is cultivating an interest in the life of the individual being promoted for the cause of beatification and canonization. This has begun in our diocese with the prayer cards and the posters of Nicholas Black Elk highlighting some aspects of his life. A website is being developed to promote his cause as well as provide historical information on his life. A Facebook page promoting the cause will also be up and running in the near future.

This is an important opportunity for the Diocese of Rapid City. I would ask that you keep this cause in your prayers. If you have not already begun to do so, please use Servant of God Nicholas Black Elk as an intercessor in your lives. We never know how the Lord will use those prayers of intercession. On this page is the prayer that has been created for this process. Hopefully it is found on prayer cards in your parishes. Let it find its way into your daily prayer life.

I believe that the church’s special recognition of Black Elk’s saintly life will provide the Native American  faith-community and peoples everywhere the example of a very special person whose presence to others is worthy of imitation. As a model, he showed how the Native American culture could enrich the Body of Christ, integrating the two traditions, thereby bringing a richness to both.

This Catholic missionary and mystic holy-man of the Oglala Sioux would be a welcome symbol to all Native Americans, leaving a legacy of someone who sought the Sacred, who lived the Gospel in everyday life, and who inspired others (Native and non-Native) to do the same.

Servant of God Nicholas Black Elk, pray for us. 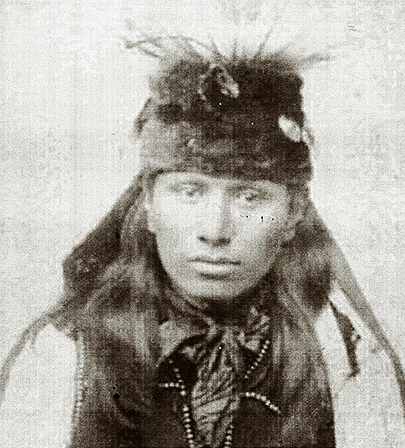 Heavenly Father, Great Spirit! Behold us, who stand before you singing our song of thanksgiving for Servant of God, Nicholas Black Elk. Faithfully he walked the Sacred Red Road and generously witnessed the Good News of our Lord Jesus Christ among the Native American people. We humbly ask you to hear the prayers we plead through his intercession. We ask Holy Mother Church to recognize his sanctity by acknowledging his presence among the company of Saints and as one to imitate in his zeal for the Gospel. Open our hearts to also recognize the Risen Christ in other cultures and peoples, to your glory and honor through Christ our Lord. Amen.