News
You are here: Home1 / News2 / Uncategorized3 / Petition to open the cause for Black Elk canonization 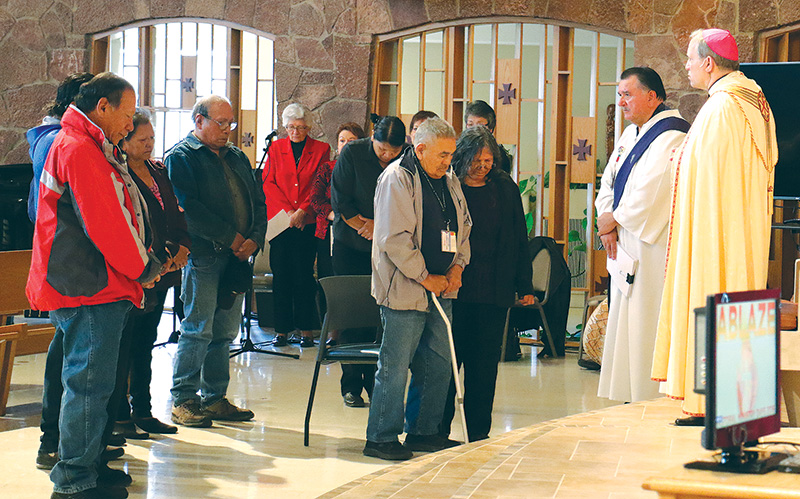 George Looks Twice, center, and the grandchildren of Nicholas Black Elk stand before Bishop Robert Gruss and Deacon Marlon Leneaugh, director of Native Ministries, after presenting a petition requesting the diocese to nominate Black Elk for the cause for canonization.

Hehani waste’, Cante wasteya nape ciuzapelo. Good morning, I greet you with a good heart and a warm handshake in the name of our Lord, Jesus Christ.

My name is George Looks Twice, I am an enrolled member of the Oglala Lakota Nation and a member of Our Lady of the Sioux Parish in Oglala, South Dakota, where I was commissioned a Lay Minister for the Rapid City Diocese in 2009. I am the eldest of three grandsons and two granddaughters of the Oglala Holy Man, Chief, and Catechist Nicholas Black Elk.

It is with great honor and privilege to be present on this historical day with my relatives, fellow tribal members, other native people, priests and lay ministers from across the diocese to present you with this petition. The petition contains over 1600 signatures from people of goodwill across the United States and Canada. The petition requests that the Diocese of Rapid City proceed as the petitioner to nominate Nicholas Black Elk, Sr. for the cause for canonization.

Our grandfather, Nicholas, was born in 1866 into a lineage of great medicine men; and atop Hinhan Kaga, “The Making of Owls” (Harney Peak) Tunkasila (God) blessed him with a great vision, and his gifts were affirmed as he went on to became a recognized healer and respected medicine man at a very young age.

Curious about Christianity, he began to watch and study. In 1885, he learned about Kateri Tekakwitha and signed the petition supporting the cause for her canonization. In 1904, he met a Jesuit priest who invited him to study Christianity at Holy Rosary Mission, near Pine Ridge, S.D. He did so, and on the feast of St. Nicholas, December 6, he was baptized Nicholas William. Saint Nicholas, appealed to him because he exhibited a model of Christian charity that resonated with grandpa’s role as a traditional spiritual leader and his own generosity in service to the Native People.

Believing that Wakantanka, the Great Spirit, called him to greater service, he became a Christian and practiced his Lakota ways as well as the Catholic religion. He was comfortable praying with his pipe and his rosary and participated in Mass and Lakota ceremonies on a regular basis.

In 1907 the Jesuits appointed him a catechist because of his love of Christ, his enthusiasm and excellent memory for learning scripture and Church teachings. Like St. Paul, he traveled widely to various reservations; preaching, sharing stories and teaching the Catholic faith with his “Two Roads Model” of catechism. He is attributed to having over 400 native people baptized, and since then his books and model lifestyle have inspired countless others in their spiritual journeys.

He died in 1950 having lived an exemplary life of being faithful to Tunkasila and always wanting to serve the native people.

There are many who are waiting to share the joy of the day when Nicholas Black Elk, Sr., will be counted among the company of saints by Holy Mother Church.

We thank you bishop for this opportunity to make this presentation to you on behalf of the Black Elk family, our grandfather Nicholas and all the people of God who support this cause.