You are here: Home1 / Office of Worship and Liturgy2 / Liturgical Inculturation

An Inculturation Task Force was convened in 1989 to discuss how Lakota symbols and prayer forms might be incorporated into Liturgy. The Task Force consisted entirely of Lakota men and women active in the Faith. They were joined by three priests: a theologian, an anthropologist, and a liturgist, who acted as consultants. Over a period of ten years, with the approval of the Bishop of Rapid City, the Task Force addressed various ways that Lakota Catholics could express some of their own cultural and religious traditions within Catholic liturgies. In 1999, then Bishop of Rapid City, Charles Chaput, approved the fruit of the Task Force’s labors: Recommendations for Inculturation of Lakota Catholicism.

These are guidelines for use by Native clergy and laity. As explained in the introductory remarks, they are to be offered as recommendations for Lakota parishioners, if they so want to include all or some of the symbols and prayer forms in Catholic liturgies. These are presented here for your information which, it is hoped, may lead to a fuller understanding of the rich treasurers Lakota Catholics may bring to the Church from their culture. 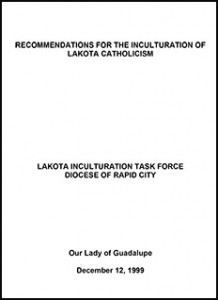