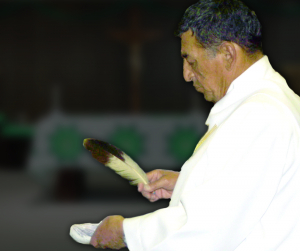 Gerald Bush, Sr. was born on March 2, 1939, in Porcupine to Eugene and Hannah (Yankton) Bush. Gerald made his journey to the Spirit World on January 27, 2022, at the Monument Health Hospital in Rapid City.

He grew up in Porcupine, and attended grade school at the Porcupine Day school. He graduated high school in 1959 from Holy Rosary Mission in Pine Ridge, where he participated in track, football and basketball. After high school, Gerald served his country by enlisting in the Navy and became an electrician’s mate petty officer, 3rd class, during his four years and received an honorable discharge.

Gerald returned to South Dakota and worked in Wanblee at Crazy Horse school and in Pine Ridge throughout the 1980s. Then, he worked for the Bureau of Indian affairs ultimately retiring in 1995. He also served on the Council of Elders for Oglala Lakota College until his passing.

On September 30, 1967, Gerald married Sandra Hawk Wing. To this union, ten children were born: Donna, Terrolyn, Michelle, Stephanie, Iris, Kristal, Gerald, Jr., Sharyl, Bradley and Luke. Gerald enjoyed many activities with his family and was a long-time rancher working the family ranch and he also enjoyed watching rodeos and loved to fish and visit with friends and family.

During Gerald’s lifetime, he also served as an Eagle Nest District representative, and was a District Chairman. Gerald was also an active member of the Legion Post 269 as a finance officer. In July of 2003, Gerald was ordained a permanent deacon through the Catholic Diocese of Rapid City, and he served the community until 2013. In June of 2008, Gerald received his Bachelors of Science degree in Lakota Studies from the Oglala Lakota College, where he also served as an instructor in Lakota Studies.