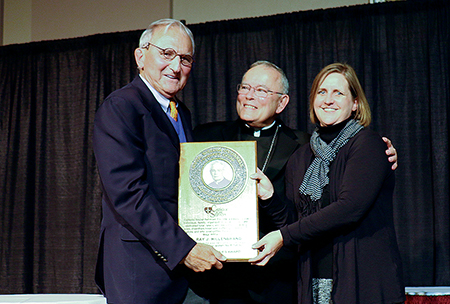 “The nine years I spent as the Bishop of Rapid City are truly among the best and happiest in my life. One reason for that happiness was you, the people I served. Dakotans have a character that comes from a closeness to a very beautiful, but also a very hard land. The other reason was the friendships I made with many of you, but first and best among them is my friendship with Raymond Hillenbrand,” said Archbishop Chaput.

“My first memory of Ray was meeting him when he was caring for his wife, Rita, as she was struggling with terminal cancer. Ray’s composure and affection for Rita, at a time of great anxiety, pain and stress, were a lesson to me and to others in Christian dignity.

“We are honoring Ray tonight for his generosity to Catholic Social Services, and that honor is well earned. Ray is able to make clear decisions and take decisive action in almost any situation. I have never seen a more generous and capable volunteer when it comes to Catholic projects. His engagement with community goes very far beyond the church. He brings his energy and enthusiasm to every task.

“He has done extraordinary things for Rapid City. He has a special love for the Native American community that shows itself in a very consistent way. His Prairie Edge Store in Rapid City is remarkable for its quality and beauty.

“Ray is also a leader and major philanthropist in the Rapid City Collective Impact Program — efforts to improve the quality of life for all the city’s residents in areas like housing, jobs, vacation, hunger, family services and health. What a wonderful task that is,” he said.

Then Archbishop Chaput chided Hillenbrand for telling Moby Dick sized fishing stories. “He does have one alarming flaw, all of us who fish tell tales, little white lies, modest little exaggerations that we invent to help other people enjoy the sport. Ray has told some whoppers.”

The archbishop explained the mission of CSS is to live out the great theological virtue of charity. “The English word charity comes from the Latin word caritas. Which simply means love. More specifically an unselfish Christian love for others, especially the suffering and the poor.

“Government programs can help solve social problems, and sometimes we need them, but they are not the same and they can never replace the role of charity. Real charity is always personal, it can’t be delegated, it’s an expression at the human-to- human level of our dependance on each other and the recognition we can never really know God until we acknowledge and support the dignity of human life that we find in other people and that we all share as children of God. When we help the poor, the disabled, the homeless, the unborn child, they also help us draw closer to heaven,” he said.

The archbishop said, what he admires most about Hillenbrand is the love in his heart that has led him to help people generously for a long time.

Following the award presentation, Hillenbrand was given a few minutes to speak.

“The thing that impresses me most about getting an award like this is the people who got it before me. I am in awe to be in their company. Three of them were friends of mine in many ways, Msgr. O’Connell probably touched the majority of lives in this room; Fr. Bill Pauly was a really special friend of mine and the other one is one of my best friends, Archbishop Charles. What Archbishop Charles has meant to me as a best friend is unbelievable because it’s not only who he is and how he operates, but it’s the way he communicates with people.”

Others were recognized at the banquet with Catholic Social Services Order of St. Benedict Awards — named for St. Martin Benedictine community, Rapid City. Those included the Hettick Family, for fostering a special needs child, Megan, who is now 34 years old; Audrey Kirkpatrick who worked at CSS for 25 years; and Rene Parker, former United Way Chair.