News
You are here: Home1 / News2 / News3 / Father Hofer to serve as Chaplain to the South Dakota National Guard 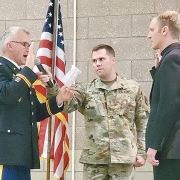 Father Adam Hofer, Blessed Sacrament Church, Rapid City was sworn in as a First Lieutenant in the South Dakota Army National Guard in November. An informal celebration was held at the parish December 8 to celebrate the occasion.

“My decision to become a chaplain in the National Guard was influenced by the serious need for chaplains in general and for Catholic priests in particular to serve as chaplains in the National Guard,” he explained in a statement to the West River Catholic. “About 24 percent of the soldiers in the South Dakota National Guard are Catholic. Also, my dad served a long career in the National Guard and I have a significant appreciation for his service and example, as well as for the chaplains and their services and support provided throughout my dad’s career. As a priest, I believe that I can support our men and women in uniform who sacrifice for the freedom that we enjoy as Americans. My service is also founded in permission to serve from the Office of the Bishop.”

His service will entail attending the “drill weekend” with the Joint Force Headquarters unit each month as well as for two weeks during the summer. He will also attend a Chaplain Basic Officer Leadership Course at Fort Jackson, S.C., to learn military protocol and chaplain specific training to effectively serve the soldiers.

A Catholic Guide to Adulting

Paul J. Kim is one of the most sought-after Catholic youth & young adult speakers in America. Moving his audiences from laughter in one moment, to deep reflection and prayer in another; Paul utilizes his many talents (i.e. music – beatboxing, comedy, inspirational talks) to communicate the Gospel message of Christ to people in a way that is engaging, entertaining, and altogether life-changing.

He’s the author of the best-selling A Catholic Guide To Adulting Online Course, he’s the founder of the Triumph Men’s Conference, he’s released two music albums, his videos have accumulated millions of views, and he presents to an average of 40,000 people a year at events throughout the world. His background includes a BA in Philosophy (Franciscan University of Steubenville), an MA in Marriage and Family Therapy (Hope International University), religious formation with the Community of the Franciscans Friars of the Renewal (NYC), and life experiences working as a therapist, missionary, and youth minister. He currently resides in Austin, TX with his beautiful wife and four children.