News
You are here: Home / News / Archives / Clear vision for the diocesan archives

(Writer’s note: These firsts do not encompass the of history of the five Indian Reservations in the Diocese of Rapid City.)

History will be made in 2020 with the first Catholic Pastoral Center in our diocese. Following are lists of the firsts we have recorded. Unfortunately, the claims for these firsts are not well documented and many dates contradict one another. These make for interesting history discussions. We would love for someone to say — “hey, wait a minute our marriage was the first recorded in …” and then we could record it as the diocesan’s firsts.

From the Dakotas to New Dakota Territory to Lead City to Diocese of Lead City and finally, to the Diocese of Rapid City – The recorded first priest, diocesan or religious order; the first Mass, low or high Mass; first church (framed, wooden or structure).

The first West River Catholic issue was published in May 1973. Publisher: Bishop Harold J. Dimmerling, Editor: Fr. William J. O’Connell. The diocesan cathedral was dedicated on May 7, 1963. Ten years later to the day the first issue was published. It was “to serve as reminder to everyone that the Blessed Virgin plays an important part in our spiritual life.”

The first Mass in Rapid City was celebrated on Christmas Day, 1883 by Rapid City’s first resident pastor, Rev. Alfred Vigeant in the first church of any denomination to be built in the new town. St. Mary Catholic Church (framed) was constructed beginning in 1881. -Excerpt from Rapid City in Retrospect, published 1982.

St. Ambrose was the first Catholic church in our diocese. Fr. John Lonergan presided at the first public low Mass in Deadwood on May 20, 1877. -The Black Hills Daily Times, Dakota Territory, 1877.

The first Mass reportedly was said in Kendall, Dakota Territory, in 1683 by a French missionary priest. Among the fur traders, he paused to say Mass for any group he came across. -Typewritten statement, author unknown.

The first Spanish speaking missionary, Rev. Pedro Morante, was in charge of the Spanish mission people in the Black Hills.

The first hospital, St. Edward Hospital was opened 1878 in Deadwood and staffed by Sisters of the Holy Cross.

“In order to make this (these firsts) as interesting as possible I would appreciate any news clippings, photos, written historical remembrances that parishioners might have which would help tell the history of our diocese.” Fr. Eugene Szalay, May 1973, wrote in the first column “Heritage In the Faith” published in first West River Catholic newspaper.

The well-known mantra of all archivists as reiterated in Fr. Szalay’s message above, of yesteryear and for the future, we must preserve and report history and send it to the archives! 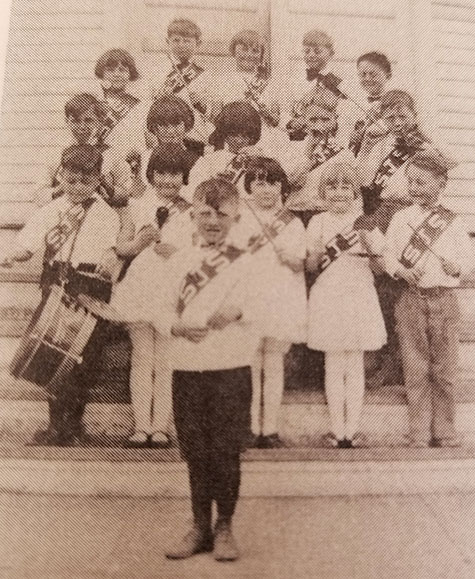 St. Joseph School in Gregory formed a rhythm band which made its first public appearing in Gregory May 2, 1929. — Dedication booklet, 1969 St. Joseph Parish

Building a lively culture of vocations in families
Scroll to top