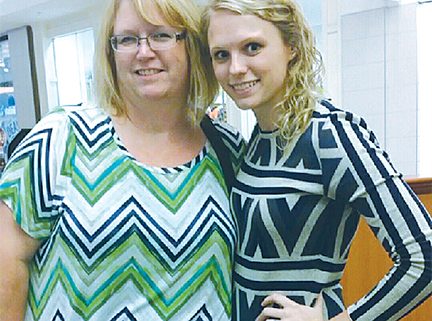 Catholic Social Services is one of the few adoption agencies that still assists with birth parent/child searches. Merri Blake and her daughter, Courtney, found each other after 28 years. (Courtesy photo)

Twenty-eight years later, CSS was there again for Merri when she decided to search for the baby who grew up as Courtney, the happy, healthy and beloved daughter of Joan and John Luft.

Because Merri shrouded her pregnancy and adoption decision in deep secrecy, only her parents, now deceased, some close friends and her husband, Jake, knew of the baby. Merri, already the single-mother of a toddler, never told her six siblings or her four other daughters, now ages 30, 24, 21 and 16, about Courtney.

“I was raised to believe that something like this was a bad thing, you know, like you did something bad and that’s why this has to happen. I didn’t realize that it could be something other than a bad thing,” Merri said.

The culture of adoption has changed dramatically in recent decades, says Natalie Lecy, director of the CSS Family Services Department. “We really encourage open adoption for everyone today. It’s healthier all around. Open adoption doesn’t mean that you’re going to be each other’s best friends, or even have regular contact. It’s just that the lines of communication are always kept open, so that medical questions or grief issues that may come up with a child can be addressed as they do,” Lecy said.

Over time, Merri came to see her adoption decision as a beautiful choice. “I just wish I would have known that a lot sooner,” she said. But once she decided to search for Courtney, things happened quickly.

By law, any birth parent or adoptee is allowed to initiate a search once the adoptee has reached the age of 18. Catholic Social Services is one of the few adoption agencies that still assists with searches. “Most agencies no longer offer this service, but CSS values the courage and selfless sacrifice of our clients who made this decision years ago so much that we’ve made a longterm commitment to help them,” Lecy said.

CSS was able to quickly connect Merri with Courtney’s mom, Joan, who grew up in Mud Butte and happened to be in the area visiting relatives.

“Courtney was the second child we adopted through Catholic Social Services and it was never a big secret that they were adopted,” Joan said. “The doors of communication between CSS and us were always open.”

After the two women met over coffee, Joan quickly shared Merri’s phone number with Courtney, who is married and living in Nashville now. The next day, Merri received a text that read: “This is Courtney. I want to talk sometime. How about tomorrow?”

“This whole thing moved a whole lot faster than I expected it to,” Merri laughed.

Courtney calls Merri’s decision to reach out to her “perfect timing.” Her older sister, Erin, had recently searched for her birth parents and the experience was a positive one. “I was planning to do it soon, too,” Courtney said. “Ever since I was little, I was always intrigued and kind of wanted to know who she was. After all, she’s part of who I am and the reason I am where I am today.”

Courtney’s questions were mostly about Merri’s circumstances at the time of her birth, her birth father and the history of her extended birth family. “She was so gracious answering all my questions,” Courtney said.

Merri’s biggest fear — that Courtney would resent her for choosing to parent her first child but place her second for adoption – proved unfounded. “I just wanted her to know the reason that I did this. I couldn’t bring another baby into my home when I couldn’t even feed or clothe the one I already had.”

Courtney says she would have done the same thing. “I never felt any resentment at all. I know I was very fortunate to wind up where I did,” she said. “If someone has the courage and bravery to give their child up for adoption, then they must be a really caring and kind person.”

Merri says she couldn’t have chosen better parents for her baby, something which was not an option 28 years ago.

“Her parents could not have raised her any better. She is so caring and considerate and such a good person. She is such a sweet girl,” Merri said.

Today, Merri and Courtney keep in touch by text, telephone and Facebook. Tragically, John Luft died unexpectedly of a massive heart attack five years ago, before getting to meet the birth mothers of his two daughters. “Not a day went by that we did not want to thank the birth mothers and birth fathers for this gift,” Joan said. “We were never threatened by them searching, or thought it would hurt our feelings.”

Joan, Courtney and Merri come from different perspectives on the adoption experience, but they share a common gratitude.

“We are all very lucky,” said Joan.