Conclusion of the diocesan phase of the Cause for Canonization

“As we bring the conclusion of this Diocesan phase of the Cause for Canonization, our hope and prayer is that one day Nicholas Black Elk will become one in the Communion of Saints as recognized and named by the Church for his life of heroic virtue and holiness and intercession”  -Bishop Robert Gruss, homily from the Closing Mass

On Tuesday, June 25, 2019, at St. Agnes Catholic Church, Manderson, SD, Bishop Robert Gruss presided at a Mass celebrating the completion of the diocesan phase of the Cause for Canonization of Servant of God Nicholas Black Elk. At the conclusion of Mass, the final documents were signed, sealed and bound with a red cord, readied to be taken to the Congregation for Causes of Saints in Rome, Italy. Fr. Louis Escalante, the Roman Postulator for the Cause, will deliver the final documents. 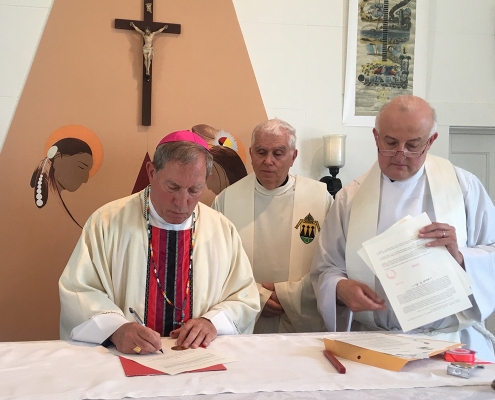 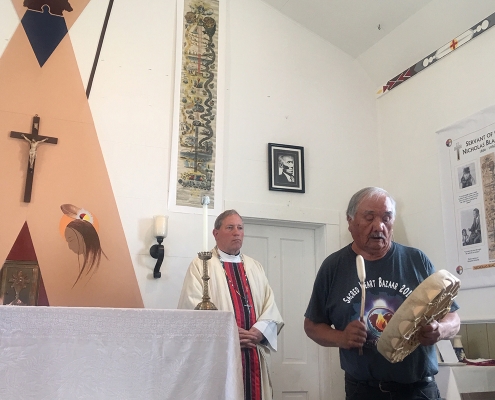 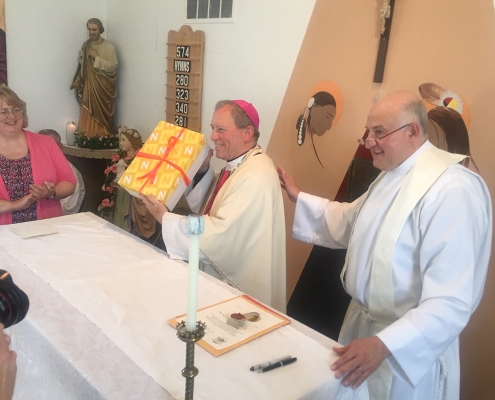 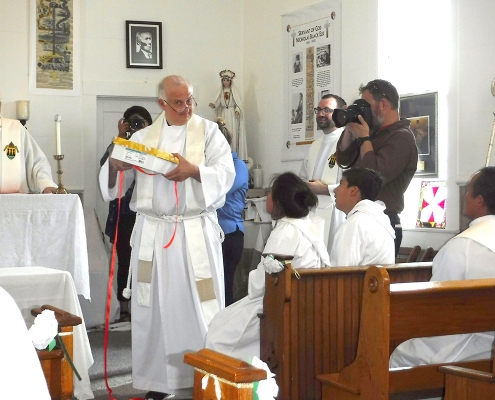 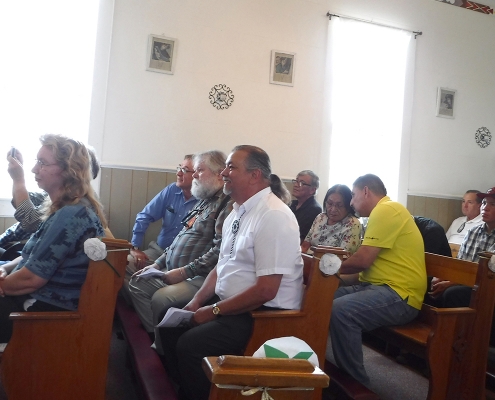 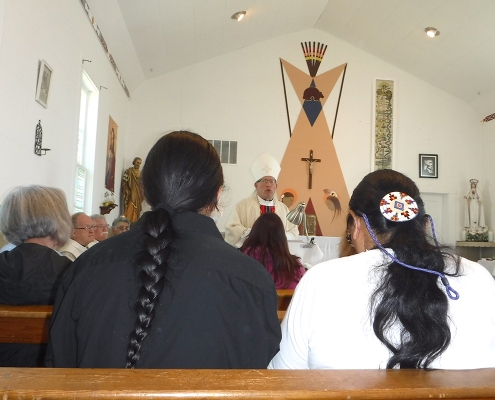 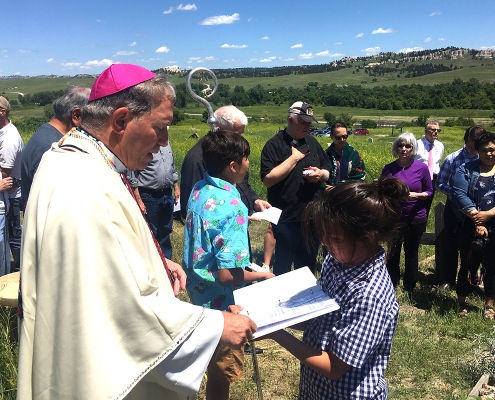 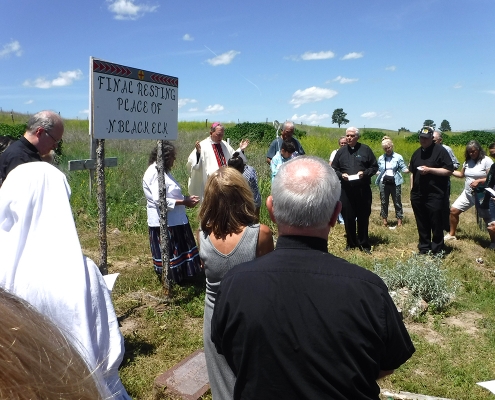 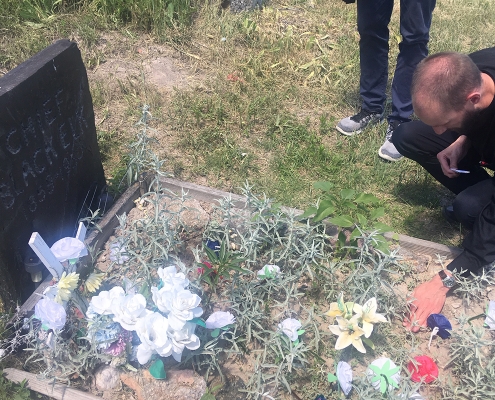 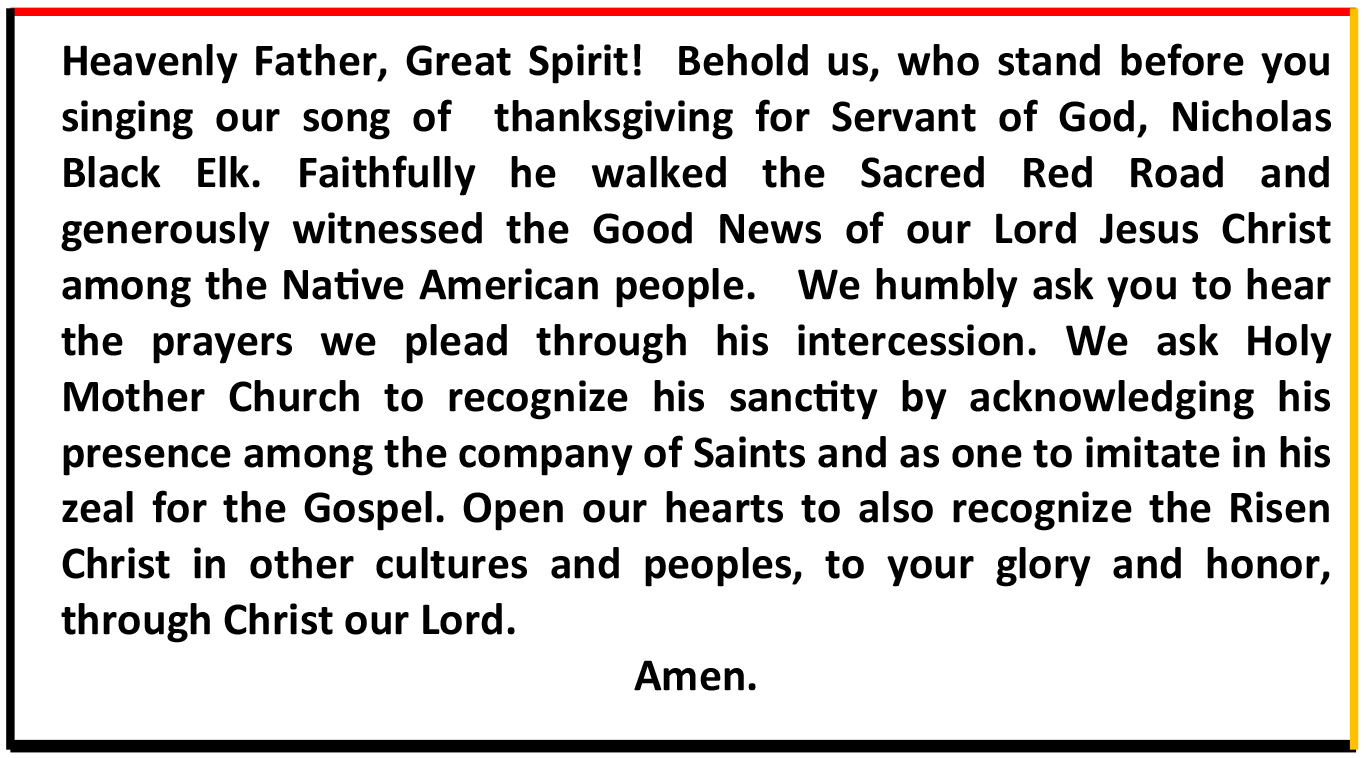 BALTIMORE (CNS) — The U.S. bishops voted Nov. 14 to move forward the sainthood cause of Nicholas W. Black Elk, a 19th-century Lakota catechist who is said to have introduced hundreds of Lakota people to the Catholic faith.

At the annual fall assembly of the U.S. Conference of Catholic Bishops in Baltimore, the bishops “approved by voice vote the canonical consultation,” or support for the cause. The episcopal consultation process is “a step in the Catholic Church’s process toward declaring a person a saint.”

The church’s special recognition of Black Elk’s saintly life will provide the Indian faith-community, and peoples everywhere, the example of a very special person whose presence to others is worthy of imitation. As a model, he showed how Native American culture could enrich the Body of Christ, integrating the two traditions, thereby bringing a richness to both.

This Catholic missionary and mystic holy-man of the Oglala Sioux, would be a welcome symbol to all Native Americans, leaving a legacy of someone who sought the Sacred, who lived the gospel in everyday life, and who inspired others (Indian and non-Indian) to do the same. This is the Lakota-Catholic identity that defined his life – an identity that many people encountered across the Pine Ridge Reservation during his lifetime.

Click here to read the presentation given by Bishop Robert Gruss to the USCCB on November 14.

Scenes from the Opening Mass for the Cause of Canonization 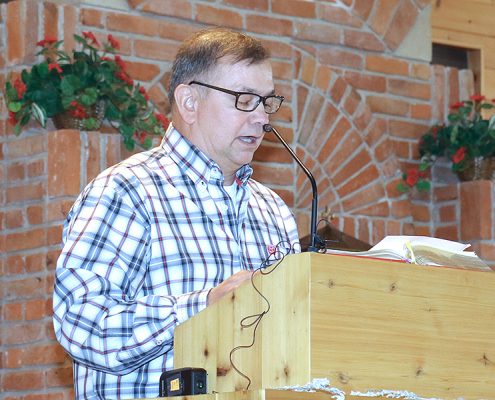 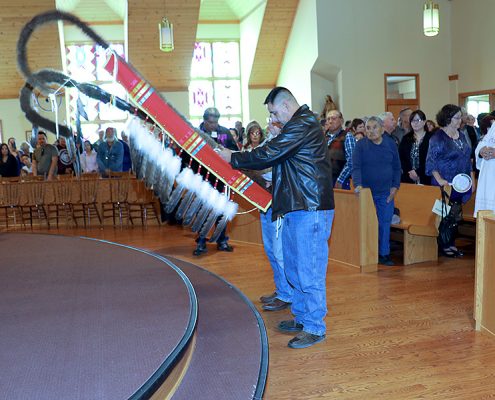 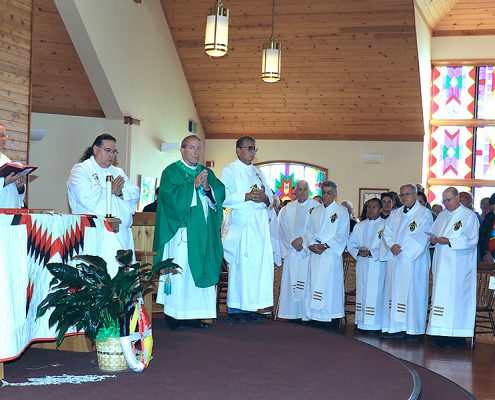 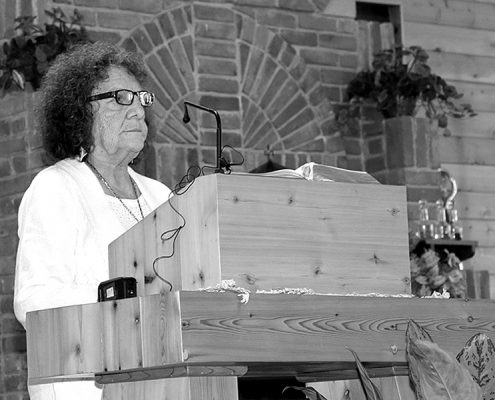 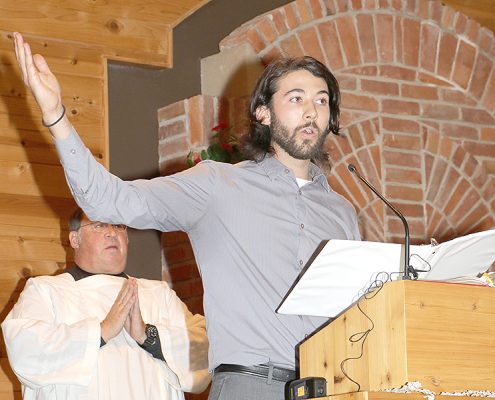 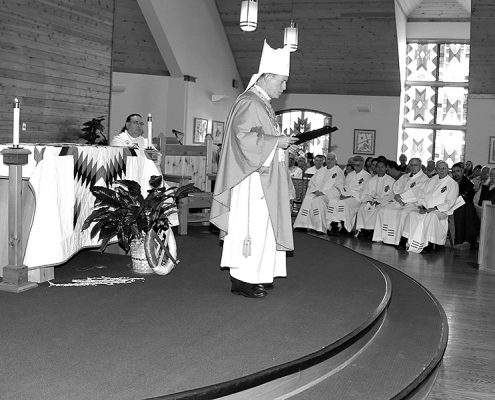 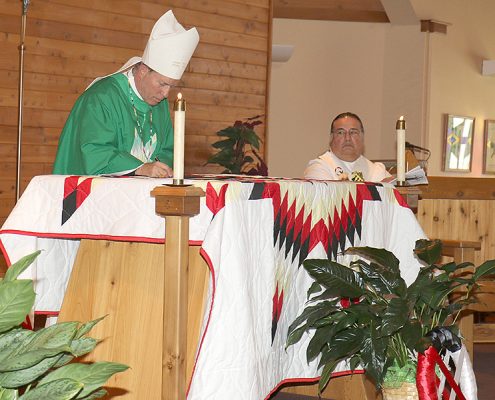 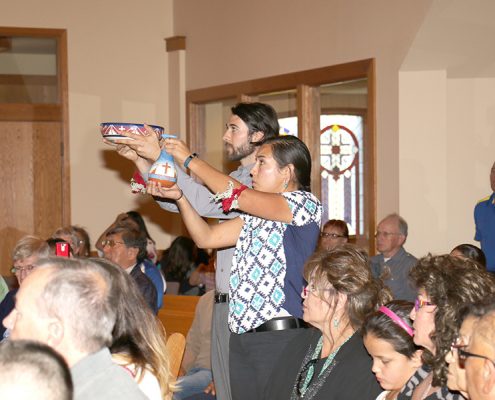 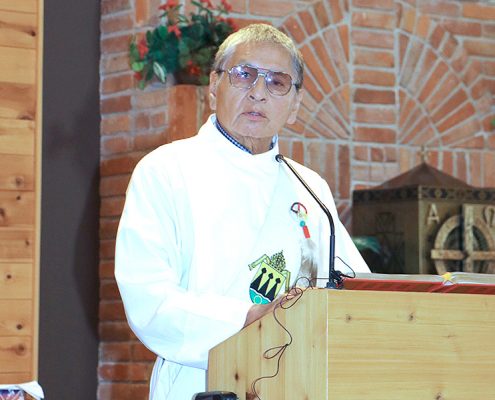 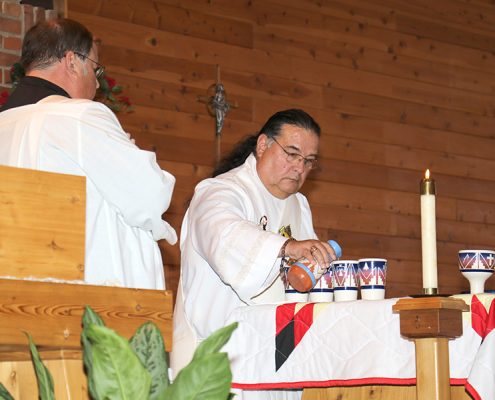 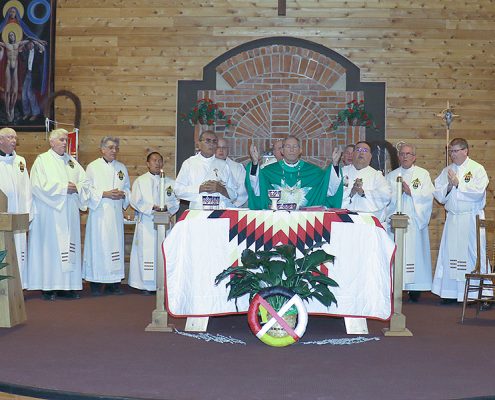 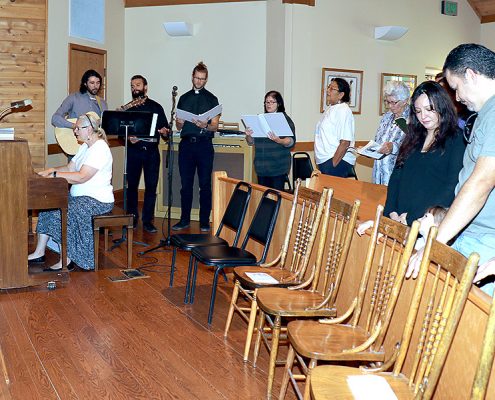 Listen to the homily by Bishop Robert Gruss

From the Opening Mass for the Cause of Canonization, October 21, 2017

Click here for a readable copy of the homily given by Bishop Gruss at the Mass. 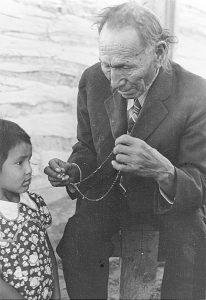 Nicholas Black Elk is pictured showing a child the rosary. As a catechists, under the direction of the Jesuit priests, then called Black Robes, Black Elk led more than 400 people to be baptized. (Marquette University Archive photo)

Black Elk, Cause for Canonization to open

On October 21, at 4 p.m. Bishop Robert Gruss will celebrate Mass at Holy Rosary Church near Pine Ridge. Everyone in the diocese is invited to attend this celebration, which will mark the opening of the Cause for Canonization of Nicholas Black Elk. A meal will be served after Mass.

Deacon Marlon Leneaugh, diocesan Director of Native Ministry, Rapid City, said, “This Mass is a diocesan-wide celebration. Even though we are in the beginning stages, when someone becomes a saint in the universal church, they become a saint for everyone. Even people from other continents can pray intercessory prayers to Black Elk. I have people who are non-Indians calling and asking if they can come. I say, ‘please do.’”

Black Elk was one of the people who signed a petition for Kateri Tekakwitha to be named a saint. When St. Kateri Tekakwitha was canonized in Rome, Oct. 21, 2012, Black Elk’s eldest grandson, George Looks Twice, met Mark Thiel, of Marquette University Raynor Memorial Libraries, (and archivist for the Tekakwitha Conference and the Bureau of Catholic Indian Missions). He asked how to begin a cause for his grandfather. Thiel enlisted the endorsement of Archbishop Charles J. Chaput, Archdiocese of Philadelphia, and Episcopal Moderator of the Tekakwitha Conference. Archbishop Chaput is also a former Bishop of Rapid City, 1988-1997. With a letter from Archbishop Chaput, petitions began circulating. Looks Twice, along with other grandchildren of Black Elk, presented a petition with more than 1600 signatures to Bishop Gruss on March 14, 2016.

Last February, Bishop Gruss appointed Bill White, Porcupine, diocesan postulator of the cause. White is an enrolled member of the Oglala Sioux Tribe on the Pine Ridge Reservation. The postulator leads an investigation on the life of the person proposed for sainthood in order to establish the merit of the cause. White said this is part of the early stages of the process. If the cause is found to have merit, Black Elk would be the first person ever canonized from the Diocese of Rapid City. White is being assisted by Fr. Joe Daoust, SJ, Pine Ridge.

“From everything I’ve read about him I believe he was a saint. I want to be part of the cause,” said White. “I’ve heard a lot of stories about Nicholas, I just have to gather information to prove those stories.” He is searching though writings by and about Black Elk. Currently, Deacon Ben Black Bear from St. Francis Mission is translating some of Black Elk’s writings from Lakota to English.

Black Elk’s date of birth is a mystery, estimated between 1858-1866. He came from a family of medicine men and he carried on their work. “A medicine man is comparable to what we know today as a physician,” said Deacon Leneaugh.

He added, “Medicine men had several responsibilities. He was a medical doctor, spiritual advisor and counselor. Being in those roles, he was the spiritual leader of the whole camp.”

In violation of the Great Sioux Treaty of 1868, settlers and prospectors began pushing into Dakota Territory looking for gold in1874. The years 1876-77 are called The Great Sioux War, a time when tribes gathered together trying to push back the fortune seekers. He was at the Battle of Little Big Horn close to the Montana-Wyoming border in 1876.

He was well traveled. Around 1877, he joined Buffalo Bill’s Wild West show and toured in Europe. The show included a command performance for Queen Victoria. He and some of his fellow performers were separated from the troupe in London and they continued touring with another Wild West show. During this time, Black Elk learned about European cultures (England, France, Germany and Italy are listed in his biographies) and he learned to speak some English. He returned to the United States in 1889.

In South Dakota, he was injured at the Wounded Knee Massacre in 1890. A bullet grazed his thigh. 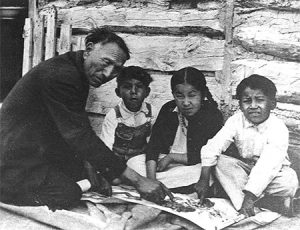 Black Elk married Katie War Bonnet in 1892 and they had three children. She converted to Catholicism and their children were baptized Catholics. After her death in 1903, Black Elk converted. He was baptized on December 6, 1904, the feast of St. Nicholas. One biographer said he took the name Nicholas because he was fond of the saint’s generosity. He married a second wife, Anna Brings White in 1905. She was a widow with two children and together they had three children. She passed away in 1941.

Long before Vatican II encouraged the permanent diaconate, there were men serving similar roles in the Diocese of Rapid City. Jesuit priests selected Lakota men to teach the faith. They were called catechists, and taught the people in their own language. In a place with few paved roads they traveled on foot or by horseback, and later by automobile. They taught lessons and prayed with people, preparing converts for the sacraments. (WRC Oct. 1992)

In 1907 Nicholas Black Elk became a catechist. Deacon Leneaugh said he was selected because of his enthusiasm and excellent memory for learning Scripture and church teachings.

“He traveled to different states and lots of reservations proclaiming the word,” said White. “As a native man travelling off the reservation at the turn of the century he encountered a lot of prejudice. He wasn’t even welcome in restaurants.”

Black Elk died August 19, 1950, at Pine Ridge. He is credited with bringing more than 400 people into the Catholic Church.

According to Deacon Leneaugh, Black Elk is a revered Holy Man among the Lakota. He bridged the gap between traditional native spirituality and Catholicism. “He showed his people that you did not have to choose between the two, you could be both. He did not abandon his native ways when he became a Christian. To him it was together — praying to the one God.”

In 2016, the U.S. Board on Geographic Names officially changed the name of Harney Peak to Black Elk Peak in the Black Hills. Black Elk said he had a powerful religious vision there in 1872. In it, the six grandfathers representing North, East, South, West, Above and Below took him to the center of the earth where he saw a fine looking man, from an unknown people, wearing an eagle feather. The man said, “My life is such that all earthly beings and growing things belong to me.” The man’s body changed to beautiful colors of light. ‘Together, we will leave a wonderful legacy for those who follow’
Scroll to top
X