News
You are here: Home / News / Diocesan Administrator / A new appreciation for the work Vatican offices do for the universal c...

After a Mass to kick off National Catholic Schools Week at the Cathedral in Rapid City, one of the mothers approached me. She had shared the picture of Pope Francis and me taken during my recent visit to Rome. One of her children commented matter-of-factly, “So, the pope got to meet Father Mike.” I laughed out loud. I am in the circle of her young life. The pope is not.

I suppose I could say that the pope was not exactly in the circle of my life either, at least not until January 13. Meeting him was a gift I will long treasure. I am grateful to all of you for helping make that possible through your gifts to the Annual Appeal.

I knew that the ad limina visit  was an opportunity to pray at the tombs of the great apostles Peter and Paul, and “check in,” with the pope so to speak. A lengthy report on the diocese had been sent last summer. What I did not expect was the warm welcome expressed by both the Holy Father and the Vatican offices we visited. I experienced a genuine concern about our diocese and the dioceses of our region. This was amazing to me considering the expanse of the Catholic Church. The pope and each of the offices we visited knew about our region and, in some cases, our individual dioceses. More than once these officials, who work in the various branches of the Vatican governance, spoke with admiration for the Catholic Church in America. For all our problems, which they also acknowledged, they saw hope in our corner of the world.

The pope spent two hours with the bishops and administrators from our region. We sat together in a circle and he listened and shared his insights, understanding and concerns with us. We were able to ask questions to which the Holy Father responded. One thing that stuck out in my mind was his insistence that we tell the people of our diocese that he is praying for all the victims of abuse. His comments were sincere and heartfelt. With all that he must focus on and be concerned about, his heart is obviously present with those who are suffering. With that in mind, I was able to share with the Holy Father the ministry our diocese shares with our Native American brothers and sisters and the promise and challenge of that ministry. I expressed our hope for the canonization process for Nicolas Black Elk and the inspiration this would give to the Lakota people and to all people of faith.

The theme of unity was constant in the various dicasteries, congregations and councils we visited. Taking their guidance from Pope Francis, there was an invitation for all people to arrive at the truth of our faith through patient listening and dialogue. There is no question that we Catholics in the United States and throughout the world face real problems. The shortage of priests, the abuse scandal, the divisions along liturgical lines, and the social and political problems were all addressed and discussed. The officials who visited with us in each office ranged in number from one to fifteen, and all of them offered support, council and suggestions for best practices moving forward.

It was obvious to me that the global scale of the work done in the Vatican offices makes their responses complicated and at times slow. However, it was also clear that, despite the heavy workload, they were all willing to receive one more letter, one more email or one more phone call. They really do want to help. The passion in their presentations and responses was inspiring. I was surprised by the connectedness and caring they offered.

So now, I can say, “Fr. Mike got to meet the pope.” I also have a renewed appreciation for the good work that the Vatican offices do on behalf of the universal church. 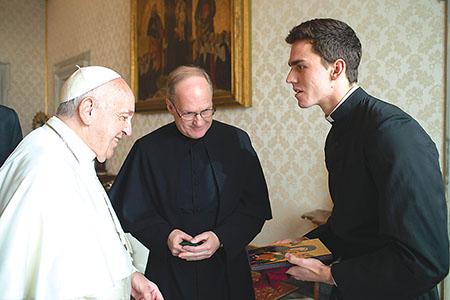 Our amen should lift the rafters
Scroll to top